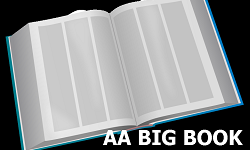 Prohibition was a social experiment in the United States that ran for 13 years. An amendment to the US Constitution put it in place, making alcohol largely illegal outside of medical use, and another amendment repealed it. But the problem of alcoholism that led to Prohibition in the first place, remained.

How to fight the disease of alcoholism when the product was perfectly legal to purchase? Two years after Prohibition was repealed, the first 12 step alcohol program was started. We know it today as Alcoholics Anonymous.

It became a matter of personal responsibility instead of law and the 12 step program gave guidance and hope to those without hope. The focus was on abstinence as the only way to avoid a downward spiral of failure, sickness and eventually death.

12 step alcohol programs are based on the idea that alcohol is a spiritual disease – one that corrupts the spirit as well as harms physically. The steps start with a simple admission, but one many alcohol abusers find very difficult. “I am an alcoholic.”

This recognition of an inability to control drinking behavior is followed by an appeal to a higher power (in a spiritual sense) to gain aid. For some, this is as simple as attending meetings, relying on the fellowship, and following the steps laid out in the Big Book.

Gradually, members move through all 12 steps of the program, each a move forward toward a healthier, happier, and stronger person. The first three steps have to do with giving control over to a higher power. The next four focus on a personal inventory and character flaws. The eighth and ninth address others harmed and the last three encourage maintenance and passing the message along.

Members of AA are encouraged to “work the steps” in order and with the advice of a sponsor who has already had success staying sober. The sequential nature is where the name “steps” comes from – as if someone were slowly climbing their way out of active addiction. Most alcoholics do not think of a 12 step alcohol program as a cure, but rather an ongoing treatment that will allow them to avoid alcohol and live a productive life.