7 Myths The Alcohol Industry Wants You To Believe 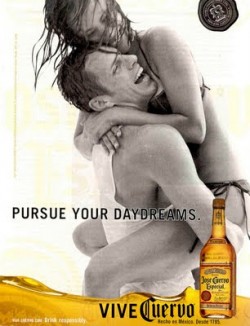 Staying on message in the liquor biz.

“Our national drug is alcohol,” wrote William S. Burroughs. “We tend to regard the use of any other drug with special horror.” This emotional loophole in the psyche has been skillfully manipulated by the alcohol and tobacco industries ever since modern advertising was invented.

Recently, the European Alcohol Policy Alliance, known as EuroCare, put together a brochureaddressing the common messages the liquor industry attempts to drive home through its heavy spending on advertising. The messages are not just designed to sell product, but also to influence alcohol policy at the political level as well. (Eurocare is a network of more than 50 voluntary non-governmental organizations working on the prevention and reduction of alcohol-related harm in 20 European countries.) According to the group, the “industry”-the alcohol and tobacco companies-“has traditionally worked closely together, sharing information and concerns about regulation. They have used similar arguments to defend their products in order to prevent or delay restrictions being placed on them (Bond, et al. 2010).”

EuroCare offers this introduction: “The intention of this brochure is to inform professionals about the attempts made by the alcohol industry to influence alcohol policy globally and to subsequently arm them against the industry’s methods to prevent effective policies from being made…. For politicians and health experts it is important that they reveal to the public the subversive messaging of the alcohol industry and do not fall prey to the industry’s half-truths-or worse-outright lies.”

I note here that it’s left to the social service agencies and non-profits to attempt to convey the opposite side of the coin: a dramatically heightened risk for health problems, traffic fatalities, domestic violence, loss of job, loss of marriage, suicide-you name it.

Message 2: The damage done by alcohol is caused by a small group of deviants who cannot handle alcohol.

This one is insidious and unscientific. There is no evidence that alcoholics are “bad people,” or simply unwilling to stop engaging in bad behavior. For the industry, irresponsible drinkers are a major revenue source-the dream customer- even though alcohol manufacturers continue to insist that their advertising is primarily about driving home the message of responsible alcohol consumption and brand choice.

Message 3: Normal adult non-drinkers do not, in fact, exist.

Explanation: Only children under 16 years of age, pregnant women and motorists are recognized by the industry as non-drinkers.

My personal favorite, this one. The existence of non-drinkers is seen by the industry as a threat. Accordingly, they have subtly reinforced the message that moderate drinking is not only normal, but also good for you. Never mind that the real profits come from excessive drinking and pricing strategies that encourage it. Estimates vary, but recent studies at UCLA show that “the top 5% of drinkers account for 42%of the nation’s total alcohol consumption.” If 5% of all drinkers account for nearly half of total alcohol sales, it would be folly for the alcohol industry to get serious about encouraging moderation. It’s not too far off the mark to say that the alcohol industry’s quarterly statements hinge on the success they have in encouraging alcoholics to believe that everything’s okay, everybody drinks that way. The message becomes clearer: Drinking is mandatory-unless you’re a deviant.

Message 4: Ignore the fact that alcohol is a harmful and addictive chemical substance (ethanol) for the body.

Explanation: The industry does not draw attention to the fact that alcohol (ethanol) is a detrimental, toxic, carcinogenic and addictive substance that is foreign to the body.

Naturally, pointing out the neuroscientific parallels between alcoholism and heroin addiction is not part of the message. Alcohol is a hard drug-ask any addiction expert. Alcoholism can kill you quick. But so far, the labeling mania that struck opponents of Big Tobacco has not played out in a major way in the battle against deceptive alcohol advertising.

Message 5: Alcohol problems can only be solved when all parties work together.

Explanation: Good, effective policies to combat alcohol consumption would require a higher excise-duty, no marketing or sponsoring, an increase in the drinking age to 18, a prohibition of the illegitimate sale of alcohol, and an increase, through a campaign, in the public’s awareness of the damages that alcohol can cause (Babor et al, 2010; WHO, 2009).

Obviously, these bullet points are not high on the alcohol industry’s agenda.

Message 6: “Alcohol marketing is not harmful. It is simply intended to assist the consumer in selecting a certain product or brand.”

Explanation: Meanwhile, research has indisputably demonstrated that alcohol advertisements are both attractive to young people and stimulate their drinking behavior (Anderson et al., 2009: Science Group of the Alcohol and Health Forum; 2009). Yet the industry continues to flatly and publicly deny that advertising stimulates alcohol consumption (Bond et al; 2009).

Stuffed with attractive young people meeting and mating over alcohol, it seems fair to suggest that alcohol ads had better stimulate increased drinking, i.e., a boost in quarterly sales, or else the industry is wasting a lot of money fighting over pieces of a pie that isn’t getting any bigger. These days, slow growth is no growth.

Message 7: “Education about responsible use is the best method to protect society from alcohol problems.”

Explanation: Effective measures such as a higher alcohol excise-duty, establishing minimum prices, higher age limits and advertisement restrictions can reduce alcohol related harm and will therefore decrease the profits of the industry (Babor, 2003; Babor, 2010). The industry therefore does its best to persuade governments, politicians, and policy makers that the above mentioned measures would have no effect, are only symbolic in nature or are illegitimate.

A truly great dodge, because the strategy being advertised sounds so imminently sensible. Who could be against the promotion of responsible alcohol use? Irresponsible zealots and deviants, that’s who. Why should all of us happy drinkers be made to suffer for the sins of a few rotten apples?

Indeed, all of the messages, overtly or covertly, send the same signal: You should drink more. It’s good for you.