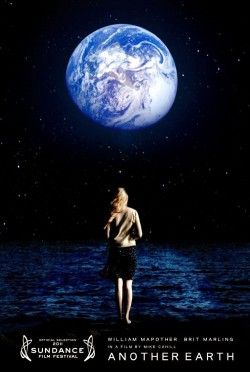 What if there was another version of you, one that was living on an another version of Earth. Would that you have made the same choices or mistakes? Would they even be alive? Would their friends and relatives be different and in what ways? Would you… like to meet you?  Those are the questions posed by a sci fi film that won awards at this years Sundance Festival.

Another Earth tells the story of Rhoda Williams, a student recently accepted to MIT, who while driving back from a party notices a planet on the horizon. Leaning out her window for a better look, she hits a sedan and kills two members of the family in it. Having been drinking at the time of the accident she is imprisoned for four years. Upon her release, she seeks out the widower of the family, John, a composer who himself has taken solice in the bottle.

The planet she saw is a mirror planet of Earth, seemingly to the extent that it even has the same people on it, and an essay contest is held where the winner can ride a space shuttle to visit it. As the planet moves closer to Earth, Rhoda considers the possibility of visiting it to find out what kind of life her mirror self would have led, while concurrently developing an increasingly intimate relationship with John, and keeping her true identity hidden from him.

Another Earth received mixed reviews from critics, 62% of which were positive according to movie review aggregator Rotten Tomatoes.

Kirk Honeycutt of The Hollywood Reporter described Another Earth as “A gripping, intimate story to which science fiction adds a provocative, philosophical context.”

Dennis Overbye of The New York Times characterized Another Earth as “a meditation on guilt and redemption in crisscrossing worlds”.

I will have to check this one out.