Are E-Cigarettes A Good Idea Or A Bad Idea? 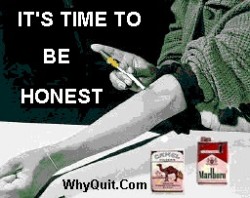 A group of nicotine researchers argue for an alternative.

Harm reduction advocates are ecstatic. But do e-cigarettes simply reduce harm to by eliminating combustion by-products–or do they perpetuate nicotine addiction, frustrate the efforts of smoking cessation experts, and give false hope to smokers that they can have their cake and eat it, too?

Dr. Siegel conducted a survey of e-cigarette users and found that 66% reported a reduction in the number of cigarettes smoked at the six-month point. “Of respondents who were not smoking at 6 months, 34.3% were not using e-cigarettes or any nicotine-containing products at the time.” Pretty impressive–although Siegel himself refers to the findings as “suggestive, not definitive”–and seemingly a giant leap forward for harm reduction.

However, even though they have dramatically altered the harm reduction landscape, e-cigarettes will not change anything for smokers who are attempting to completely quit using nicotine. When they inhale their last e-cigarette mist, several hours later they will begin to suffer the same withdrawal pains as regular cigarette smokers: “Irritability, craving, depression, anxiety, cognitive and attention deficits, sleep disturbances, and increased appetite,” as NIDA summarizes it. Current smokers are keenly interested in the new products, partly because of health concerns, and partly, it seems safe to venture, because a new generation of nicotine-based products like e-cigarettes “will enable them to put off the need to quit smoking,” as Dr. Dorothy Hatsukami, director of the Tobacco Use Research Center at the University of Minnesota, has asserted.

Harm reduction advocates for the electronic cigarette often make it sound like once the smoker is only inhaling nicotine, his or her problems are solved. But nicotine, of course, is the addictive part. Nicotinic receptors are present in moderate to high density in the brain areas containing dopamine cell bodies–the ventral tegmental area and the nucleus accumbens-the same pattern as almost every other addictive drug.

Even that part wouldn’t be a problem if addiction to nicotine were utterly benign. But it isn’t–although you wouldn’t know it from the pro-electronic cigarette propaganda. Nicotine in the blood is correlated with increases in arterial vasoconstriction, and is strongly suspected of playing a role in arteriosclerosis and other cardiovascular diseases. Nicotine increases LDL cholesterol, causes brochoconstriction, and has been implicated in the origin of lung tumors. There are also strong suggestions of links between nicotine and low birth weights in newborns.

So, it’s important not to kid ourselves about the hazards of nicotine, even though it may also be a medicine under certain conditions, like many other addictive drugs. Nicotine, you may recall, found industrial use as a farm crop insecticide. A poison, in other words. Nonetheless, what nicotine is NOT linked to certainly matters as well. Nicotine does not cause chronic obstructive pulmonary diseases, like emphysema-a huge plus. Nicotine won’t worsen asthma, as cigarettes do. And in the form of the electronic cigarette, it won’t cause secondhand smoke-another major plus for the e-cig.

There is another approach to regulating the harm caused by cigarettes. A group of scientists has been calling for a major effort at reducing the amount of nicotine in cigarettes so that, over time, a non-addictive level of nicotine would be reached–and cigarettes would no longer be addictive. Study after study has shown that if such were the case, about 80 to 90% of smokers would quit. And teens who experimented with truly low-nicotine cigarettes wouldn’t get hooked-unlike the “light” cigarette scandal, where the supposedly safer cigarettes may actually have turned out to be more dangerous because they forced smokers to smoke more in order to get the desired effect. Dr. Hatsukami and five other prominent nicotine expertscontend that extremely low-nicotine cigarettes do not cause smokers to smoke more, “because it is harder to compensate for very low nicotine intake,” according to Hatsukami. Especially if there are no high-nicotine alternatives for sale-legally, at least. Mitch Zeller, who along with Hatsukami, co-chairs the National Cancer Institute’s Tobacco Harm Reduction Network, painted this picture: “Imagine a world where the only cigarettes that kids could experiment with would neither create nor sustain addiction.”

Nonsense, counters Dr. Gilbert Ross of the American Council on Science and Health. “Asserting that smokers won’t smoke more cigarettes to get the nicotine they crave is a fairy tale,” he said. “The likely result is a major increase in cigarette-related diseases.”

These are the competing visions of our nicotine-addicted future. In one scenario, smokers stay addicted to nicotine, with its accompanying heath risks and all the other negative aspects of being addicted. But the immediate harm to their health is lessened due to fewer inhaled carcinogens, and they don’t create secondhand smoke. In the opposing scenario, smokers continue to smoke, and society continues to deal with secondhand smoke through no-smoking policies, while medical research agencies, under government mandate, oversee the gradual reduction of nicotine in cigarettes to a level below what is needed for addiction.

The optimistic thought here is that either of these approaches would bring much-needed improvement to the semi-controlled anarchy and hypocrisy of the current situation.