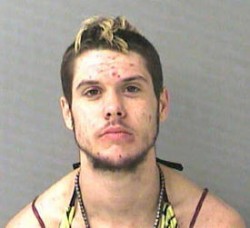 Mark Thompson, 19, of West Virginia was arrested last week on charges of animal cruelty, after a three day bath salt binge culminating in the kidnapping and killing of a neighbor’s pet.  The story as reported by the Charleston Gazette gets far worse.  Friends looking for the pet, a pygmy goat named Bailey, which was a birthday present to the neighbor’s four year old grandson, was found with it’s throat slashed.  The crazed perp in above photo was covered in blood and donned in panties and bra when chased down by police. Cpl. Sean Snuffer, a detective with the Sheriff’s Department added that “They are also searching for signs of sexual trauma” as pornography was found next to the poor pet’s body.

Sold under such names as Ivory Wave and Vanilla Sky; bath salts are actually powerful stimulants containing chemicals such as mephedrone and methylenedioxypyrovalerone (MDPV) and can legallly obtained at head shops, truck stops, and on the Internet.

Physicians in emergency rooms across the country who have encountered patients high on the so called bath salts describe them as psychotic, difficult to restrain, confused, and paranoid. Thankfully, these powerful drugs are being banned state after state; Alabama banned them back in February. To learn more about the deadly salts and their devastating effects, watch this recent investigative report by NBC Dateline’s Chris Hansen.