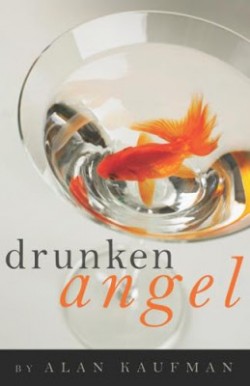 A hipster gets his shit straight-sort of.

Addiction memoirs remain one of the most popular forms of autobiography on the shelves. But now, when considering a new addition to the genre, it’s impossible not to wonder whether the claims being made by the author are genuine. Since serious drunks often end up visiting the lower circles of hell during the course of their disease, hair-raising and improbable scenes are lamentably common-that is part of the genre’s charm, if that is the right word for it. But how are we to react now? The answer is, you can’t know, and you never really could, that bastard James Frey notwithstanding.

But read them we do. Alan Kaufman, the author of the lively but exasperating autobiography of alcoholism, Drunken Angel, sweetens the pot considerably. He drops so many names, and finds himself involved in so many improbably episodes of transnational mayhem and kinky sex, that the escapades could almost fill a Bond novel. But to be fair, there’s nothing debonair going on here; not from a man who describes himself at one stage as “filthy, nauseous, hungover, astonished at my gargantuan appetite for the abyss.” And a willing suspension of disbelief, an attitude of innocent until proven guilty, must hold sway in the end, else why read them at all?

Alan Kaufman is more Jack Kerouac than James Bond: One of the founding members of California’s Spoken Word scene, editor of The Outlaw Bible of American Poetry, Kaufman bounced through the beat/hippie/downtown scenes in New York, and San Francisco and Israel, writing for Jewish publications, treating his wives shabbily, and blacking out all over whatever town he happened to be in. It’s not pretty, and it’s not meant to be. The deep layer of poverty and grunge that settles over the author’s existence between bouts of the literary high life caused Kirkus Reviews to complain that “Drunken Angels” was marred by the author’s tendency to whip schizophrenically “between manic moments of literary self-aggrandizing and deeply depressive moments of shocking wreckage.”That’s true-but Kaufman is also a classic case of dual diagnosis, an alcoholic who also suffers from delusions, hallucinations, and Post Traumatic Stress Disorder after his time spent in the Israeli Army. (It’s complicated.) Also known as co-morbidity, this combination often makes for complicated, even potentially fatal difficulties, as on a bus ride with his wife one night, when he “realized that certain passengers were Satanists who had singled out Anna and me for human sacrifice.” Not good.

Down and almost out, he is scooped from the gutter by an acceptance letter from the Columbia University Master of Fine Arts program, where he hobnobs with Tama Janowitz and Steve Jobs’ sister, the writer Mona Simpson. But always, there are “the nightmares, the operatives, the unfolding skein of sinister designs” that Kaufman must negotiate as his mental health deteriorated. And the drinking never really stopped.

Finally, in order to both prove he’s sick and to signal his distress, Kaufman slit his wrists, then “staggered to the bathroom, wrapped white towels around the bloody wounds, and with a sense of exhilaration, called 911.” Perhaps the reader may be forgiven for not sharing in the exhilaration at this stage of the narrative, after reading about the author being ejected from crash pads by acid dealers for bad debts, dodging alimony and child support, neglecting a daughter on another continent, veering into sadomasochistic sex (in considerable detail), sleeping in filthy gutters, on warm street grates, on park benches. Kaufman made a habit of sitting down at restaurant tables to finish off the leftovers. “Ate donuts from garbage cans, pizza crusts from sidewalks, half-rotten fruit found in doorways. I kept my cash for booze…” In one excruciating scene, he tracks down an ex-girlfriend in her class at Columbia, calls her a whore in front of the class, and hits her in the face. A roomful of witnesses to that one, presumably. “In all this,” he tells us,” I never once lost my grip on the scotch bottle. Not a drop lost.”

So, that was it for Columbia. “All my life,” Kaufman writes, “ I had been going, fleeing. Leaving. Home, friends, jobs. Cities, countries, armies. Marriages, families-everything…. Anything but this, anyone but you, anywhere but here.” That was also about it for common sense from our anti-hero. We are pretty safe, it seems to me, in assuming that only a blackout alcoholic with severe mental problems is likely to wake up with a cruel hangover, married to the total stranger he finds lying in bed next to him. And then proceed to try and make the marriage work.

But in time, the story arc swings toward redemption, and Kaufmann falls in with AA and the Twelve Steppers.  “You’re allergic to alcohol and obsessed with it at the same time,” an AA companion tells him. “The combination is fatal and unstoppable. Once booze hits your system, the jig’s up: you must drink.” And, to his immense credit, at long last, Kaufman gets straight, and eventually stays that way, even if the sordid circumstances of his life do not instantly change for the better. One of the most valuable lessons Kaufman takes away from AA (one of the most valuable lessons many people learn there) is a hoary old maxim called HALT: Don’t get too Hungry, Angry, Lonely, or Tired. All serious trigger conditions for relapse in freshly abstinent alcoholics and other drug addicts.

His book is a reminder that all of an addict’s life problems do not blessedly vanish the instant he or she stops drinking or using, any more than a regular schedule of insulin injections ends all problems for diabetics-the more so in cases where addiction is mixed with diagnosable mental illness. Getting clean and sober does not eliminate Kaufman’s sexual aggression, his tendency to lie to his wives, or bring back his ability to write steadily for a living.

In the end, Kaufman met a lot of famous people, managed to get published in some very hip venues, helped spark a poetry movement in San Francisco-and has now been clean and sober for more than 20 years. So what does he have to say about the prime mover of this amped-up narrative, alcoholism itself? It happened in the usual way-a formative alcohol experience at a young age. In early high school, a football player, Kaufman went out with some school buddies and without much thought began passing around those big gallon jugs of cheap Gallo wine. “I felt the universe swim into view. I stumble, drunk, to the grass and lay with arms and legs akimbo, like an altar sacrifice smiling at the blazing stars. For the first time in my life, I felt connected, happy, sure that life belonged to me and I to it. And I drank myself unconscious.”

Travelling alone in Germany, late in the book, after a nightmarish tableaux of temptation arranged for him by a cadre of Russian soldiers ready to pour vodka down his gullet in the spirit of macho brotherhood, Kaufman breaks away and finds a quiet spot in a deserted train car, and holds his own AA meeting in his head. “My name is Alan, I’m an alcoholic,” he says silently to himself. And then he says the Serenity Prayer, “then the 12 steps, and, appointing myself as guest speaker, shared about the experience I’d just had with Russian soldiers and endless vodka.” The phantom faces of his AA friends “kept me company right until I reached Berlin. And they are always with me, to this day, the meeting that I carry in my soul.”