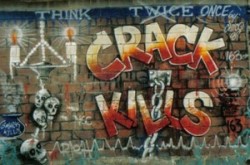 Possibly the saddest drug related story i’ve seen in days (let’s be real), the smoking gun reports of an arrestee’s overdose – resulting from the ingestion of an once of cocaine that moments earlier had been up his beloved brother and partner in crime’s buttocks. Gives a new meaning to crack kills.

Deangelo Mitchell, 23, and his brother Wayne, 20, were being taken to the local jail in the back of a North Charleston Police Department cruiser on November 30, 2011 when the duo began whispering about narcotics hidden inside the older sibling. You can try to decipher the convo here as it was all recorded. The older brother talks his bro into eating the ounce of cocaine hidden in his buttocks for fear of getting into more trouble than he was already in. The younger brother complies with the request and after the older sibling pulled the bag out of his backside, he slipped it to his brother who then put his head down proceeded to ingest it. He died within an hour of eating the large quantity of cocaine.

This was overdose extreme, the police report linked in the smoking gun article describes a scene more reminiscent of an exorcism than an arrest. Initially charged with narcotics trafficking, Deangelo Mitchell was released from custody after posting $50,000 bond. But after a review of the police footage, cops decided to charge him with involuntary manslaughter in connection with his brother’s death.

This is yet another cautionary tale for those that like to dabble in the dark art of nether region intoxication. I’ve noticed another spike in butt chugging on google searches – I can only guess this is due to a new spin on the Tacky Christmas Sweater Party.