On Chemical Imbalances In The Brain 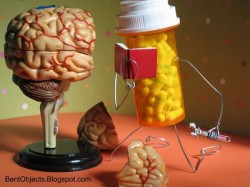 Maybe it’s not such a bad theory after all.

The brain, as always, bats last. It compensates, reregulates, and adjusts. One of the major ways it accomplishes this is through the neuroadaptive phenomenon called downregulation. When we take drugs continuously, the brain compensates for the artificial flood of, or sensitivity to, serotonin, dopamine, and other neurotransmitters by cutting back on its own production, and the receptors on the cell surfaces ultimately degrade. This is, in fact, what can happen in a case of active addiction, or with the habitual use of any receptor-active drug. The phrase “chemical imbalance,” as a means of describing this process, fell out of favor as soon as Pfizer started using the analogy in its television advertising for zoloft.

Call it a receptor imbalance, then. Call it neuronal dysregulation, if that helps. The concern with downregulation is that, over time, chronic use of serotonin reuptake blockers or dopamine-active drugs of abuse can lead to both a decrease in the number of receptors and a desensitization of existing receptors. The brain does not stay idle during these artificial rains of neurotransmitters. As explained by Peter Kramer in Listening to Prozac: “The chronic, constant, reliable presence of high levels of neurotransmitter causes the cell to downregulate-reducing the number of receptors, by drawing them back into the cell membrane, where they become inactive, or by otherwise uncoupling them from further events.”

The brain adjusts to the constant bombardment of addictive drugs. Downregulation and upregulation are not well understood. If significant downregulation takes place, then conceivably, there could be a rebound effect. Even withdrawal from non-addictive drugs can be difficult and stressful, as the brain upregulates to account for the new biochemical dispensation. Drugs of abuse, and the drugs used against them, share one important trait-they both illustrate the adage that too much of a good thing is a bad thing.

The entire field of addiction medicine has its detractors, of course. In particular, the SSRI medications have been a prominent target since their inception. Dr. Peter Breggen, Dr. Joseph Glenmullen, and other critics have been particularly vocal in their objections to the use of serotonin-active drugs. They argue that psychoactive drugs cause assorted brain dysfunctions, and that such medications do far more harm than good. But these jeremiads aside, there are legitimate issues surrounding the use of many of the receptor-active drugs that addicts and alcoholics may encounter, or may request-whether treatment consists of a formal in-patient clinic or an informal arrangement with a family practitioner. Since addiction and mental illness overlap, a percentage of addicts are likely to encounter antidepressant and other psychoactive drugs during treatment. Drawing on work by Robins, Kessler, and Regier, Dr. Lance Longo, Medical Director of Addiction Psychiatry at Sinai Samaritan Medical Center, wrote as far back as 2001: “Approximately half of individuals with bipolar disorder or schizophrenia and approximately one third of those with panic disorder or major depression have a lifetime substance use disorder. In general, among patients with alcoholism, nearly half have a lifetime history of coexisting mood, anxiety, and/or personality disorders.”

The optimistic view of anti-addiction drugs says that depressive and addictive episodes feed on themselves. The more you get that way, the more you get that way, so if you can somehow give the brain a giant holiday from being serotonin- and dopamine-impaired, it will naturally adjust, compensate, rewire. It will teach itself. It will learn how not to be addicted and depressed all the time. In this view, what the addict/depressive needs is normalcy, a period of feeling better, a chance to sort things out, adjust behavior, become productive, and build confidence. While all of this is happening, under the influence of an antidepressant or an anti-craving drug, the patient learns to experience a different kind of world on a daily, even minute-to-minute basis. Like training wheels, the medications give the brain its first chance in a long time, possibly ever, to operate within the normal parameters of serotonin, dopamine, norepinephrine, and GABA metabolism.

Okay, “chemical imbalance” is a very imprecise description of all this. But branding it as a “myth” has the potential of doing far more damage, by discouraging active addicts from seeking medical treatment.

Adapted from The Chemical Carousel: What Science Tells Us About Beating Addictionby Dirk Hanson.