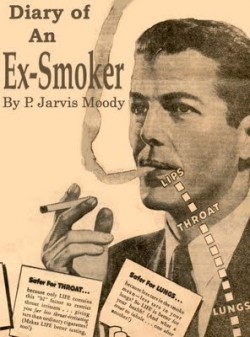 The chemistry of sorrow during nicotine withdrawal.

When you smoke a cigarette, nicotine pops into acetylcholine receptors in the brain, the adrenal glands, and the skeletal muscles, and you get a nicotine rush. Just like alcohol, a cigarette alters the transmission of several important chemical messengers in the brain.“These are not trivial responses,” said Professor Ovide Pomerleau of the University of Michigan Medical School. “It’s like lighting a match in a gasoline factory.”

Experiments at NIDA’s Addiction Research Center in Baltimore have confirmed that nicotine withdrawal not only makes people irritable, but also impairs intellectual performance. Logical reasoning and rapid decision-making both suffer during nicotine withdrawal. Acetylcholine appears to enhance memory, which may help explain a common lament voiced by many smokers during early withdrawal. As summarized by one ex-smoker, “I cannot think, cannot remember, cannot concentrate.”

But there is another, less widely discussed aspect of nicotine withdrawal: profound sadness. Profound enough, in many cases, to be diagnosed as clinical unipolar depression.

Of course, people detoxing from addictive drugs like nicotine are rarely known to be happy campers. But quitting smoking, for all its other withdrawal effects, reliably evokes a sense of acute nostalgia, like saying goodbye to a lifelong friend. The very act of abstinence produces sadness, joylessness, dysphoria, melancholia-all emotional states associated with unipolar depression.

Work undertaken by Dr. Alexander Glassman and his associates at the New York State Psychiatric Institute has nailed down an unexpectedly strong relationship between prior depression and cigarette smoking, and the findings have been confirmed in other work. This sheds important light on the question of why some smokers repeatedly fail to stop smoking, regardless of the method or the motivation.  The problem, as Glassman sees it, is “an associated vulnerability between affective [mood] disorders and nicotine.”

Now a group of Canadian researchers, working out of the Centre of Addiction and Mental Health (CAMH), and the Department of Psychiatry at the University of Toronto, believe they have isolated the specific neuronal mechanisms responsible for the profound sadness of the abstinent smoker.

Writing in the Archives of General Psychiatry, the investigators, who had access to what the CAMH proudly calls the only PET scanner in the world dedicated to mental health and addiction research, gave PET scans to 24 healthy smokers and 24 healthy non-smokers. Non-smokers were scanned once, while heavy and moderate cigarette smokers were scanned after smoking a cigarette, and also after a period of acute withdrawal. Earlier research of this kind had focused on nicotine’s effect on dopamine release. But Ingrid Bacher and her coworkers in Toronto were measuring MAO-A levels in the prefrontal and anterior cingulate regions, two areas known to be involved in “affect,” or emotional responses. When patients suffering from major depressive disorders get scanned, they tend to show elevated levels of MAO-A. The so-called MAO-A inhibitors Marplan, Nardil, Emsam, and Parnate are still in use as antidepressant medications. In general, the higher the levels of MAO-A, the lower the levels of various neurotransmitters crucial to pleasure and reward. A high level of MAO-A would suggest that the enzyme was significantly altering the activity of serotonin, dopamine, and norepinephrine in brain regions involved in mood.

The researchers found that smokers in withdrawal had 25-35% more MAO-A binding activity than non-smoking controls. “This finding may explain why heavy smokers are at high risk for clinical depression,” says Dr. Anthony Phillips, Scientific Director of the Canadian Institutes of Health Research’s (CIHR’s) Institute of Neurosciences, Mental Health and Addiction, which funded this study.

Although researchers involved in these kinds of drug studies almost always claim that the work is likely to lead to new pharmacological therapies, the plain truth is that such immediate spinouts are rare. But in this case, it does seem like the study provides a clear incentive to investigate the clinical standing of MAO-A inhibitors as an adjunct therapy in stop-smoking programs. “Understanding sadness during cigarette withdrawal is important because this sad mood makes it hard for people to quit, especially in the first few days,” said Dr. Jeffrey Meyer, one of the study authors.

As one addiction researcher noted, an associated vulnerability to depression “isn’t going to cover everybody’s problem, and it doesn’t mean that if you give up smoking, you’re automatically going to plunge into a suicidal depression. However, for people who have some problems along those lines, giving up smoking definitely complicates their lives.”