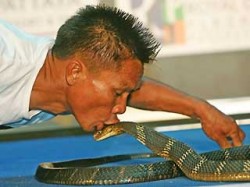 In a report from India, Snake Bite as a Novel Form of Substance Abuse: Personality Profiles and Cultural Perspectives, doctors from the Central Institute of Psychiatry in Ranchi describe the cases of two individuals that had purposely subjected themselves to potentially lethal cobra bites as a source of a recreational high.

One of the patients treated learned of the intoxicating effects of snake venom through some of his friends and decided to try it in order “to experience the kick the other substances now lacked.”  With the help of the nomadic snake charmers common in India, the patient subjected himself twice to the snake bite over his left forearm over a period of 15 days.  The other patient described the experience after the snake bite as a blackout associated with a sense of well-being, lethargy, and sleepiness.  Both patients had long histories of “traditional drug abuse” and there is evidence suggesting that they used the snake venom as a substitute for morphine and in mitigating opioid withdrawal.

Of all the novel forms of psychoactive substance use reported, snake venom represents the potentially most dangerous form.  There are between 35,000 to 50,000 cobra bite related deaths per year in India.  If the people of India are worried about this becoming a problem, Faces of Meth would have nothing on a Limbs of Venom campaign.