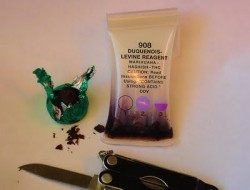 A 75-year old pot assay is due for an update.

We’ve all seen it on cop shows: The little plastic bag, the officer breaking the seal on a small pipette and inserting a bit of marijuana, then a firm shake, and voila, the liquid in the test satchel turns purple: Guilty.

Here’s an interesting twist they don’t tell you about: The so-called Duquenois-Levine test-the dominant method for field-testing marijuana since 1930-is considered by many to be wildly inaccurate, and frequently doesn’t hold up in court. One U.S. Superior Court judgereferred to the test as “pseudo-scientific.”

The test itself works fine. The problem is that, in addition to identifying marijuana or hashish, the Duquenois-Levine, or D-L, frequently reads positive for tea, nutmeg, sage, and dozens of other chemicals-including resorcinols, a family of over-the-counter medicines, which, according to John Kelly at AlterNet,includes Sucrets throat lozenges. This does matter, because in New York, Washington, D.C., and elsewhere, inner-city minority kids are getting busted for pot in record numbers. Lacking a reliable test protocol, marijuana is whatever the officer says it is. In a classic case that continues to bedevil the testing industry, a middle-aged woman was busted for marijuana while bird watching. A “leafy substance” turned purple on the Duquenois-Levine (D-L) test, and the woman was arrested. The material turned out to be sage, sweetgrass, and lavender, and the woman was engaging in a Native American purifying ritual using a smudge, a concept with which the arresting officers were unfamiliar.

So, when push comes to shove, a positive D-L rarely establishes the presence of marijuana beyond a reasonable doubt, without further confirmatory testing. For at least 20 years now, a visual inspection and a NarcoPouch, as the D-L field test is called, were enough to bring on the felony charges. State courts have squabbled over the matter, but state legislatures have been reluctant to intervene, in large part because sending samples to a lab for confirmatory testing is prohibitively expensive, particularly when the busts are small. The D-L test saves money.

According to the official drug policy of the United Nations, a positive marijuana ID requires gas chromatography/mass spectrometry analysis. And even this far more sophisticated test has angered courts in Washington and Colorado, the UK Guardianreports, “because the DEA doesn’t have standard lab protocols to govern its use.” In part, the judges are furious because plea-bargaining depends upon valid drug possession evidence. So, the officers themselves, when it comes to testifying in court, become de facto expert witnesses, able to identify illegal drugs on sight. Ah, those were the days. But now, cannabis-based products come in a bewildering variety of sizes, shapes, colors, smells, and chemical compositions.

But c’mon, if it looks like bud and it smells like bud… except that the research shows there are 120 terpenoid-type compounds involved in the odor of marijuana. No two varieties smell exactly alike. There is no characteristic marijuana smell-there are hundreds of characteristic marijuana smells. Nonetheless, in 2009 the National Academy of Sciences called the testing of controlled substances “a mature forensic science discipline,” according toAlterNet.

In a 2008 article for the Texas Tech Law Review, Frederic Whitehurst, Executive Director for the Forensic Justice Project and formerly with the FBI, concluded:“We are arresting vast numbers of citizens for possession of a substance that we cannot identify by utilizing the forensic protocol that is presently in use in most crime labs in the United States.” In another section of the article, Whitehurst asks: “Why is this protocol still being utilized to decide whether human beings should be confined to cages and at times, to death chambers?” And as Stewart J. Lawrence and John Kelly write in theGuardian, “using manifestly flawed drug identification tests to charge defendants, or pressure them to plead guilty, is hard to square with a defendant’s right to due process.”