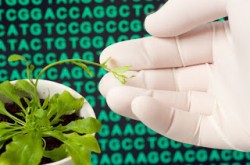 Why marijuana gets you high, and hemp doesn’t.

Cannabis sativa comes in two distinct flavors-smokeable weed, and headache-inducing hemp. The difference between hemp and smokeable marijuana is simple: Hemp, used for fiber and seed, contains only a tiny amount of THC, the primary active ingredient in the kind of cannabis that gets you high. I am old enough to recall the sad saga of California hippies driving through my natal state of Iowa, and filling their trunks with “ditch weed”-wild hemp that grows commonly along Iowa rural fencerows, and while it cannot get you high, it could, back then, get you arrested.

But the California hippies who ran afoul of the law in Iowa were not so stupid as it might seem. Even a marijuana connoisseur can have a hard time telling the difference between strong sinsemilla and wild hemp. Both varieties look similar, have similar growth patterns and flowering schedules, and a fresh bud of ditch hemp can look and smell enticingly like the real thing. Even the trichomes-the thousands of sticky, microscopic stalks that grow on the female flowers, each containing a bead of resin, like a crystal golf ball on a tee, containing mostly THC, in the case of pot, and mostly CBD, in the case of hemp-are also similar in appearance and growth behavior.

A study by a group of Canadian researchers, just published in Genome Biology,lays out the draft genome of marijuana, containing all of the plant’s hereditary information as encoded in DNA and RNA.In their article, Timothy Hughes, Jonathan Page and co-workers reported “a draft genome and transcriptome sequence of C. sativa Purple Kush.” (The genome and transcriptome can be browsed or downloaded at The Cannabis Genome Browser.) More than 20 plant genomes have now been sequenced, including corn and rice, but Cannabis sativa marks the first genomic sequencing of a traditional medicinal plant.

So how does it happen that one version of cannabis comes power packed, while the other version shoots blanks, so to speak? The researchers began with the modern facts of the matter: The THC content of medical and recreational marijuana is “remarkably high.” Research shows that median levels of THC in dried female flowers of Purple Kush (the strain used in the study) and other high-end variants now approach 11%, with some strains achieving a stratospheric 23% THC content by dry weight. Why can’t breeders pull any buzz out of ditch weed? How did cannabis split into two distinct subtypes? In an accompanying editorial entitled “how hemp got high,” Naomi Attar calls Cannabis sativa “a plant with a ‘split personality,’ whose Dr. Jekyll, hemp, is an innocent source of textiles, but whose Mr. Hyde, marijuana, is chiefly used to alter the mind.” In brief, what are the biological reasons for the psychoactive differences between marijuana and hemp?

Co-lead author Jon Page, a plant biologist at the University of Saskatchewan, along with Tim Hughes of the Department of Molecular Genetics at the University of Toronto, compared the genomic information of Purple Kush, a medical marijuana favorite, with a Finnish strain of hemp called Finola, which was developed for oil seed production and contains less than 1% THC content. That is not enough THC to be mind-altering in any way. Instead, what Finola has in abundance is cannabidiol, or CBD, the other major ingredient in cannabis.

CBD isn’t considered psychoactive, but it does produce a host of pharmacological activity in the body. CBD shows less affinity for the two main types of cannabis receptors, CB1 and CB2, meaning that it attaches to receptors more weakly, and activates them less robustly, than THC.  The euphoric effects of marijuana are generally attributed to THC content, not CBD content. In fact, there appears to be an inverse ratio at work.According to a paper in Neuropsychopharmacology, “Delta-9-THC and CBD can have opposite effects on regional brain function, which may underlie their different symptomatic and behavioral effects, and CBD’s ability to block the psychotogenic effects of delta-9-THC.”

The kind of cannabis people want to buy has a high THC/low CBD profile, while the hemp chemotype is just the reverse-low THC/high CBD. While the medical marijuana movement has concentrated on Purple Kush and other high-THC breeds, medical researchers have often tilted towards the CBD-heavy variants, since CBD seems to be directly involved with some of the purported medicinal effects of the plant. So, CBD specifically does not produce the usual marijuana high with accompanying euphoria and forgetfulness and munchies. What other researchers have discovered is that pot smokers who suffer the most memory impairment are the ones smoking cannabis low in cannabidiol, while people smoking cannabis high in cannabidiol-cheap, seedy, brown weed-show almost no memory impairment at all. THC content didn’t seem to matter. It was the percentage of CBD that controlled the degree of memory impairment, the authors of earlier studies concluded.

In a press release from the University of Saskatchewan, the researchers explain how they think this divergence came about: “Over thousands of years of cultivation, hemp farmers selectively bred Cannabis sativa into two distinct strains-one for fiber and seed, and one for medicine.” This intensive selective breeding resulted in changes in the essential enzyme for THC production, which “is turned on in marijuana, but switched of in hemp,” as Page put it.Furthermore, says co-leader Tim Hughes of the Department of Molecular Genetics at the University of Toronto, an additional enzyme responsible for removing materials required for THC production was “highly expressed in the hemp strain, but not the Purple Kush.” The loss of this enzyme in Purple Kush eliminated a substance “which would otherwise compete for the metabolites used as starting material” in THC production.

Without knowing the mechanics of it, underground growers and breeders have been steadily maximizing the cultivation of strains of cannabis high in THCA synthase, the result of which is a molecular blocking maneuver that maximizes THC production. This is great for getting high, but may not be the optimal breeding strategy for producing plants with medicinal properties.  Raphael Mechoulam, the scientist who first isolated and synthesized THC, has referred to plant-derived cannabinoids as a “neglected pharmacological treasure trove.”  The authors of this study agree, and have already identified some candidate genes that encode for a variety of cannabinoids with “interesting biological activities.” Such knowledge, they say, will “facilitate breeding of cannabis for medical and pharmaceutical applications.”

But cannabis of this kind may turn out to be low-THC weed. And that may be a good thing, some researchers believe. Marijuana expert Lester Grinspoon told Nature News: “Cannabis with high cannabidiol levels will make a more appealing option for anti-pain, anti-anxiety and anti-spasm treatments, because they can be delivered without causing disconcerting euphoria.” (We’ll leave definitional issues about the effects of euphoria for another post.)

Finally, the authors strongly suggest that if it were not for “legal restrictions in most jurisdictions on growing cannabis, even for research purposes,” we would have known all of this stuff years ago, and would have been well on our way to developing “finer tailoring of cannabinoid content in new strains of marijuana,” as Nature News Blog describes it.