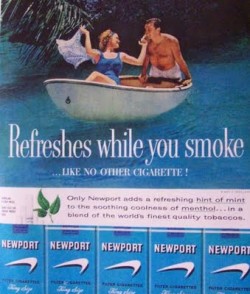 Nicotine experts say menthol makes addiction more likely–but differ over what to do about it.

Back in the 1920s, Lloyd “Spud” Hughes of Mingo Junction, Ohio, was working as a restaurant cashier when, legend has it, he smoked some cigarettes that had been casually stored in a tin that contained menthol crystals. Menthol, a compound found in mint plants and also manufactured synthetically, is used medicinally, and as a food flavoring. Back in Spud’s day, menthol was mostly derived by extracting crystals from the Japanese Mint plant. What we know for certain is that the mentholated cigarettes tasted so good to Spud that he patented the mixture. In 1925, the Spud Cigarette Corporation of Wheeling, West Virginia, was born, and Spud Cigarettes quickly became the 5th best selling cigarette brand in America.

Dr. Neal L. Benowitz, Professor of Medicine and Bioengineering & Therapeutic Sciences, and Chief of the Division of Clinical Pharmacology at the University of California in San Francisco, says that Spud Hughes had “accidentally identified an additive whose pharmacologic actions reduce the irritating properties of smoke generally and nicotine specifically.” Menthol accomplishes this because it acts on receptors involved in the detection of physical stimuli like temperature and chemical irritation. “Menthol contributes to perceptions of cigarettes’ strength, harshness, or mildness, smoothness, coolness, taste, and aftertaste.” That would seem to just about cover it. But no: In their article for the New England Journal Of Medicine-“The Threat of Menthol Cigarettes to U.S. Public Health”-Benowitz and Jonathan M. Samet also claim that “menthol has druglike characteristics that interact at the receptor level with the actions of nicotine.”

And nicotine hardly needs much help establishing its grip over addiction-prone individuals. “It’s not that it’s so intensive,” Dr. Benowitz told me some years ago, when I was researching my book, The Chemical Carousel, “it’s just that it’s so reliable. Nicotine arouses you in the morning; it relaxes you in the afternoon. It’s a drug that you can dose many times per day for the purpose of modulating your mood, and it becomes highly conditioned, more than any other drug, because it’s used every single day, multiple times per day.”Benowitz, along with Dr. Michael Siegel of the Boston University School of Public Health, recently sparked intense debate when they both championed electronic cigarettes as a safe alternative to smoking tobacco cigarettes, despite the FDA’s earlier wish to keep e-cigarettes out of the country. And last month, an advisory report for the FDA by a group that included Benowitz and Samet concluded that mentholated cigarettes were no more harmful, and no more likely to cause disease, than regular cigarettes. A study in the Journal of the National Cancer Institute of 440 lung cancer patients and more than 2,000 matched patients without lung cancer showed no correlation at all between menthol and cancer. In fact, the researchers were surprised to discover that menthol smokers appear to have a lower risk of lung cancer than other smokers. Asked whether menthol cigarettes are more toxic than non-menthol cigarettes, the study’s author William Blot of Vanderbilt University definitively responded: “The answer is, no, they are not.”

However, the advisory report suggested that, while menthol cigarettes may not be more dangerous, they might be more addictive than regular cigarettes.  In the May 4 New England Journal of Medicine article, Benowitz and Samet argue that because menthol cigarettes attract younger smokers by making tobacco easier to smoke, and because more of these smokers go on to become lifelong nicotine addicts due to this same cooling effect, “menthol cigarettes increase the likelihood of addiction and the degree of addiction in new smokers.” Further adding to menthol’s tendency to create lifelong smokers is the fact that “some consumers, particularly blacks, hold beliefs about implicit health benefits of menthol cigarettes that may interfere with their quitting.”

This is a substantial indictment of menthol as a component of cigarettes, despite the belief among some experts that it is much ado about nothing. But if that’s the case, Benowitz and Samet suggest, why has the tobacco industry fought so ferociously to exempt menthol from the list of banned flavorings over the years? And why has the industry so consistently linked its marketing of menthol cigarettes to images of “freshness” and health?The authors estimated that “by 2020 about 17,000 more premature deaths will have occurred and two million more people will have started smoking than would have been the case if menthol cigarettes were not available.” Two million additional cigarette smokers by the end of the decade does not sound especially trivial. Nonetheless, the FDA advisory report that Benowitz helped to shape stopped short of recommending an outright ban on nicotine, saying only that removal of menthol would “benefit public health.”

While not disputing the findings of the FDA Advisory Committee, Dr. Michael Siegel of Boston University expressed dismay that “despite these conclusions, the [committee] did not recommend a ban on menthol cigarettes.” There are almost 20 million menthol smokers in the U.S., Siegel argues. If even a fraction of them quite smoking due to a ban on menthol in cigarettes, “it would have a profound effect on public health.” This is, Siegel insists, precisely why politicians managed to exempt menthol from bans on various flavor additives in the first place. The Black Congressional Caucus had “vigorously denounced the exclusion of menthol” at the time, while Lorillard, maker of Newports–the leading brand of menthol cigarettes–argued that banning menthol would result in the creation of a huge black market.  Because of all this, Seigel charges, Benowitz and the committee simply “punted the issue back to the FDA.” And if anyone harbored doubts about who benefited from this non-action, in Siegel’s view, one need only look at the fact that Lorillard’s stock enjoyed a nice run-up of about 8% after the public announcement of the FDA panel’s recommendations.

Because of all this, Siegel does not believe the FDA will ever ban menthol cigarettes. In his view, the Obama administration doesn’t need the grief of added health care complexities just now, and there is no movement in Congress to make additives an issue. And since the FDA has chosen not to demand the banning of menthol, Siegel thinks the committee’s findings will serve as a convenient smokescreen for Congress. And for the makers of menthol cigarettes, it will be business as usual. A window of opportunity on the menthol issue is now closing, says Siegel, who confesses to difficulty understanding a policy that bans “every other type of cigarette flavoring-including chocolate, strawberry, banana, pineapple, cherry, and kiwi-yet exempts the one flavoring that is actually used extensively by tobacco companies to recruit and maintain smokers… Menthol is a major contributor to smoking initiation and continued addiction, and for this reason, it will continue to enjoy the protection of a federal government that seems afraid to alienate any corporation, whether it’s part of Big Pharma, Big Insurance, or Big Tobacco.”