The Economic Cost Of Heavy Drinking 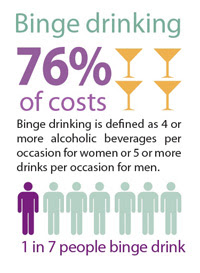 Some food, or rather, some drink for thought.

The report estimates that the per capita cost of excessive drinking was approximately $746 for every man, woman, and child in the United States in 2006.

Here is a breakdown of the cost of excessive drinking:

(The study was conducted for the CDC Foundation, a nonprofit enterprise that creates programs with the Centers for Disease Control for fighting threats to health. The study analyzed 2006 costs obtained from national databases.)