Follow Up On Mt. Ranier Climbers – They Made It 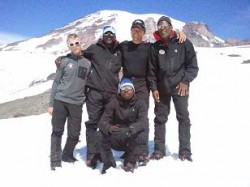 The recovering addicts who set out to climb Mt. Ranier made it. See original post for more of their story.

On August 13th, four out of the five men from our New Creation’s program made it to the summit of Mt. Rainier, along with two Emmy award-winning television journalists, John Sharify and Doug Burgess, who documented the men’s journey.

This was truly and landmark event in these men’s lives. Many have been homeless and addicted to drugs for years.

John Sharify and Doug Burgess’ hour long documentary on the men and their climb will air on KING5, October 22nd at 9:00pm.