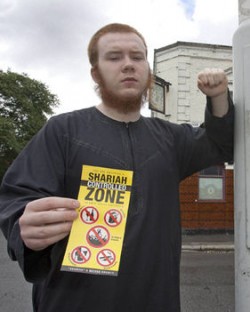 A 31 year old Australian man was allegedly lashed with electrical cable by four heavily bearded men who broke into his bedroom in Sydney at about 1am on Sunday morning. Three of the men in their late teens or early 20s, allegedly held him down on his bed while a fourth, aged between 40 and 50, lashed him about 40 times over half an hour. The victim, a recent Islamic convert known ironically only as Christian, told police he recognised the men from his local mosque and that they were punishing him for having a few drinks with friends.

Islamic Sharia Law strictly prohibits the drinking of alcohol. Members of Sydney’s Muslim community have condemned the attack. “This criminal act has no place in Islam. As Australian Muslims we are required to follow Australian law, not take the law into our own individual hands,” Ahmed Kilami, from the Muslim Village, told the Seven Network.