More proof that my nebulous HP is for real.  That’s him peeking from behind the clouds – 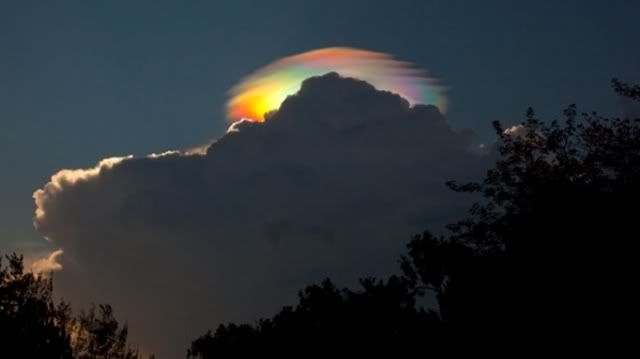 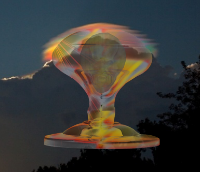 If you think I’ve lost it, I’m just joshing.  Read more about The Omnipotent Doorknob here.

The pic is actually a rare rainbow cloud seen over the skies of Ethiopia.  Known as Pileus clouds, these clouds only form when the convective current is strong enough and the upper atmosphere has enough water in it to form ice crystals.  Even then, what most people see are puffs of white cloud over the top of the cumulus clouds, not dazzling rainbows.  As with any rainbow effect, the light has to be precisely placed.  Light has to hit the cloud and diffract through the prism of the drops.  But when light hits the cloud from behind, it usually hits the eye of the beholder head-on as well.   This means that any rainbow effect is drowned in a flood of white light.  Iridescent clouds are only visible when something blocks out the light from the sun while still showing the light through the clouds.  In this case, the dark cumulus cloud blocks out the sunlight, while the pileus cloud shimmers.