An Interview With Neuroscientist Jon Simons 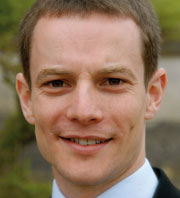 Brain scans have put cognitive neuroscience on the map. They have become a key part of addiction studies as well. In fact, brain scans have put neuroscience on the front page, due to the controversies they have engendered. Cognitive neuroscientist Jon Simons, a lecturer in the Department of Experimental Psychology at the University of Cambridge, UK, and principal investigator at the University’s Memory Laboratory, is attempting to expand our understanding of the specific regions of the brain involved in human memory. His research involves functional neuroimaging of healthy volunteers and examining the effects of neurological and psychiatric disorders, and normal aging, on memory abilities.

Dr. Simons obtained his PhD at the MRC Cognition and Brain Sciences Unit in Cambridge, and from there moved to a post-doctoral position at Harvard University. He returned to the UK and took up a research fellowship at University College London before returning to Cambridge. He was recently senior author on a thought-provoking paper published in the Journal of Neuroscience about a brain structure variation that might explain why some people in the general population are better than others at distinguishing real events from those they imagined or were told about. We asked Dr. Simons to help straighten out some of the confusion over scanning data, and to be the third guest in our “Five-Question Interview” series.

1. PET and fMRI scans have stirred up a good deal of debate and heated argument lately. While brain scans have been used to extend our understanding of crucial functions like memory and reward, they’ve also been used to “prove” that we’re addicted to our iPhones. Some scientists put almost no faith in them at all. What’s going on?

Neuroimaging methods like fMRI have certainly become quite common in the media over recent years. Unfortunately, not all the media coverage does the kind of job we might wish in explaining the methods and findings and, importantly, the limitations and caveats that need to be considered when interpreting the data. You mention the recent New York Times op-ed in which it was claimed that people “literally love their iPhones,” on the basis that viewing an iPhone was associated with fMRI activity in a brain region previously linked with “love and compassion.” Unfortunately, the same brain area has also been linked with negative emotions like disgust, as well as many other cognitive functions, seriously undermining the claims in the New York Times story. It may turn out to be true that our feelings about iPhones reflect love, or perhaps more likely a kind of dopamine-driven addiction response, but such simplistic analyses as the one the NYT gave such prominence are unlikely to help with understanding that.

However, I think it’s a mistake to confuse the media representation of fMRI research with the field itself. Many researchers design very careful fMRI experiments in which factors of interest are varied while others are controlled, and resulting patterns of brain activity are analysed with statistical caution and interpreted in the light of a broad range of previous findings. This is the kind of work that is moving the field forward, but, like most good science, it is not particularly sexy, and the researchers involved are less keen to make the kinds of extravagant claims that get you into the New York Times.In my view, it’s up to all of us-scientists and journalists-to make sure that the public get to hear more about the good fMRI work, and less about silly iPhone love stories.

2. Is there a specific role for functional neuroimaging in the diagnosis and treatment of addiction?

This isn’t really my area, but I know from talking with colleagues that neuroimaging has certainly contributed to understanding the neurobiology of addiction. For example, a great deal is known about the brain networks and neurotransmitter systems implicated in impulsivity, compulsions, reward processing and other cognitive functions that are relevant to addiction disorders. Such knowledge is obviously very important for informing clinical practice. Whether neuroimaging can also play a role in diagnosis and treatment is, as far as I can tell, less clear. Making accurate diagnoses in an individual on the basis of neuroimaging data requires characterisation of the specific patterns of brain activity exhibited by that individual, which is difficult to achieve. Similar problems afflict attempts to assess the success of different treatments. However, as imaging technology develops and statistical methods are refined, it may be that neuroimaging will be able to offer new insights that contribute to effective diagnosis and treatment.

3. Please explain the basics of state-dependent memory as it relates to alcohol, using your famous example about remembering Brad Pitt’s or Angelina Jolie’s phone number.

Ha! Glad if the example I used has proven memorable. The basic idea of state-dependent memory is that your recollection of a previous event is likely to be better if you’re in the same physiological state as you were when the event occurred. So, to use alcohol as an example, if you’re at a party and happen to drunkenly strike up conversation with Angelina Jolie (or Brad Pitt, if you prefer) and, bowled over by your charm and witty repartee, she tells you her phone number, you may well not remember it when you wake up sober the next morning. However, the evidence from many state-dependent memory studies suggests that you would have a better chance of recalling the number if you got drunk again. The effect doesn’t just apply to alcohol: any physiological state, any emotion we’re feeling, in fact any aspect of the context we’re in when we try to remember, which was also there when we previously experienced an event, will improve our memory for that event. This was described as the ‘encoding specificity principle’ by a great memory researcher, Endel Tulving.

4. Some researchers maintain that mental illness and addiction to drugs and alcohol are not, properly speaking, diseases at all. What’s your stance on the continual battles over the “disease model” of addiction and other disorders like depression?

There are both advantages and disadvantages to the “disease model” of cognitive disorders. For some people, it might be helpful to receive a clinical disease diagnosis and, perhaps, an idea of the therapeutic interventions through which they might go about “recovering” from their condition. Among the disadvantages are that labelling people as “addicts”, for example, can stigmatise those struggling with dependence and might lead to them avoiding responsibility for changing their addictive behaviour because they see diseases as requiring expert intervention. It’s a difficult area, and I can see both sides of the debate.

5. You’ve done neuroscience at Cambridge in the U.K., and at Harvard in the U.S. Is science conducted differently in the two countries?

My experience was that science in the US at that time (in 2000-2001) was different from in the UK. There seemed to be many more opportunities to get involved in interesting projects and to gain access to advanced technical equipment like fMRI scanners than was the case in the UK then. I also noted a difference in the willingness of people who were experts in techniques like fMRI, or in research involving patients with rare brain lesions, to share their expertise and resources in a collaborative way. Fortunately, I’ve found since I’ve been back in the UK a similarly friendly and collaborative environment, particularly in Cambridge now. I think this is partly a result of initiatives to bring researchers together across traditional scientific boundaries, such as Cambridge Neuroscience. However, I think the biggest US/UK difference now is the prevalent feeling that science is valued much more in the US than it is over here. Despite the best efforts of campaigns like Science is Vital, successive UK governments have failed to invest in science to the same degree as other nations, including the US. Particularly in the current financial climate, when significant cuts to science funding have been threatened, this means that morale is low, uncertainty is high, and significant numbers of scientists are deciding to move abroad. I don’t know that I’m ready to join them yet, but if the situation gets much worse, it would have to be something I’d consider.