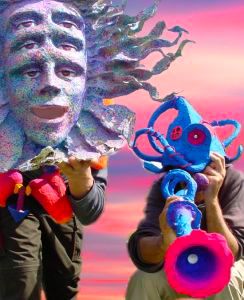 An expert on abnormal brain function talks about drugs, hallucinations, and addiction.

Vaughan Bell gets around. The multifaceted clinical and research psychologist, currently a Senior Research Fellow at the Institute of Psychiatry, King’s College, London, is, in fact, down in Colombia right now. He arrived in the country to teach clinical psychiatry at Hospital Universitario San Vicente de Paúl and the Universidad de Antioquia in Medellín, Colombia, where he remains an honorary professor, but right now he works for Médecins sans Frontières (Doctors Without Borders) as mental health coordinator for Colombia, which means he is quite frequently off in the jungle, doing good work under very bad conditions. Bell has written for numerous scientific journals, includingCognitive Neuropsychiatry, Psychiatry Research, and Cortex. He has also written forSlate, The Guardian, Scientific American, and is a contributing editor at Wired. TheNew York Times ran a fascinating profile of Bell’s work on debunking theories about the Internet as a cause of addiction and psychosis. He is well known online for his contributions to the Mind Hacks blog, which covers unusual and intriguing findings in neuroscience and psychology. He is also working on The Enchanted Window: How Hallucinations Reveal the Hidden Workings of the Mind and Brain, a book for Penguin UK.

Q. You’ve been looking into abnormal brain states of late: delusions, hallucinations, and dissociative disorders.  Do drugs, madness, brain injuries, and religious experiences have anything in common? Is there an underlying cause for seeing or experiencing things that aren’t there?

Vaughan Bell: Apart from involving the brain, often not. Unusual perceptions occur because the normal processes that allow us to generate sensory impressions of the world become distorted. For example, the idea that we see the world as it is, is a bit of a myth, because we experience things that aren’t there all the time. The eye allows light to fall on the retina, two flat areas of photoreceptor cells which provide only patchy and poor resolution coverage of the visual field, and yet we have a very rich visual experience. The brain is filling in the rest. In your blind spots, you receive no visual information and yet we don’t have two black spots in our vision because we ‘hallucinate’ the best guess visual experience.

These are not usually considered hallucinations because the experience remains stable and predictable but these same processes, with just slight instabilities, can lead to spectacular hallucinatory states – such as Charles Bonnet syndrome –where damage to the retina leads to visions of monkeys, rabbits and little men. In other words, there are as many causes for hallucinations as there are causes for our perception of reality. If the same processes are affected through drugs, brain damage, trance states, stress or simply expectation, we can say that a particular experience has a similar basis but we have to think of the interaction to understand them filly. Trying to explain experiences solely by the brain, mind or environment makes little sense.

Q: You’ve experimented with “the vine”-ayahuasca, a powerful South American hallucinogenic plant that contains DMT. You obviously lived to tell about it. Did you see any transdimensional machine elves?

Bell: There were no transdimensional machine elves, although the whole experience was quite striking. I was kindly invited to take part in the ceremony by a chap called Romualdo, a Uitito taita (shaman), who I happened to meet in a conference about indigenous culture and I was very grateful for the opportunity.

I suspect the experience of meeting what McKenna called the “machine elves” is more prominent when pure DMT is smoked which gives a more concentrated acute dose. The traditional process of taking ayahuasca, known as yagé in Colombia, involves drinking a potion made from the vine until you start puking. To get a fair dose you need to repeat this process several times, so the absorption is much slower. I managed three or four drink – puke cycles and the psychedelic effects were prominent although I never lost track of reality. I was, however, very struck by the appearance of classic Kluver form constants, geometric patterns that are probably caused by the drug affecting the visual neurons that deal with basic perceptual process (e.g. line detection).

Q. As a research psychologist, you have been critical of the disease model of addiction for being both too simplistic about mind and behavior, and too all-encompassing to be credible. In an article for Slate, you wrote: “Despite the scientific implausibility of the same disease-addiction-underlying both damaging heroin use and overenthusiasm for World of Warcraft, the concept has run wild in the popular imagination. Our enthusiasm for labeling new forms of addictions seems to have arisen from a perfect storm of pop medicine, pseudo-neuroscience, and misplaced sympathy for the miserable.” How should we view addiction, and how should we be dealing with it?

Bell: I think we should view addiction as an over-applied label that is distracting us from the fact that not everyone’s difficulties with unhelpful repetitive behavior can be understood and treated in the same way. Often compulsive behaviors do have shared factors. Obsessive-compulsive disorder, impulse control disorders (like pathological gambling or compulsive stealing) and drug addictions are all known to have shared similar behavioral, neurological and genetic features but that does not mean that each disorder is essentially the same.

The idea that playing too many computer games or compulsive use of the Internet is an addiction like any other is really obscuring the fact that different compulsive behaviors also have many different components. It would be like saying that all “mood disorders” are essentially the same-it would neither be scientifically nor clinically helpful and would cause more confusion that insight. This is the situation we have with addiction at the moment.

Q. You’ve been living and working in South America for some time now. How has the drug trade and the drug war changed that part of the world, in your own experience?

Bell: If you don’t mind, I’m going to skip this question. The drug trade is interwoven with the conflict in Colombia and myself and my colleagues in Médecins sans Frontières (Doctors Without Borders) work in areas where the fighting is live and ongoing. One of the things that allows us to do our work in areas controlled by armed groups is that we are a neutral organization solely concerned with providing medical care without getting involved in the politics behind the conflict. Of course, like everyone else, I have a view, but in case it affects either our access to the people we’re trying to treat or the security of our teams in the field, I’ll keep it to myself when I’m mentioned alongside the organization.