Khat To The Chase 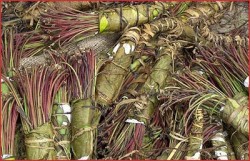 Automobile accidents are the ninth leading cause of death worlwide, according to the World Health Organization (WHO). More than a million people are killed on roads annually, and that number could rise to 2.5 million by 2020. WHO estimates that traffic accidents cost developing countries an astonishing 1-2 % of their gross domestic product (GDP).

For years now, police and public health officials have puzzled over the alarming number of traffic accidents in East Africa. In terms of sheer numbers, Asian countries have the highest total traffic fatalities, according to figures compiled by the Global Road Safety Partnership (GRSP), a consortium including the World Bank, the Red Cross and other aid agencies (PDF HERE). That is not surprising, since these nations contain the majority of the world’s drivers.

However, beyond the picture of traffic fatalities in terms of sheer numbers, or on a per population basis, there is another revealing measure-traffic deaths per motor vehicle. And when the GRSP measured nations by that yardstick, the four worst countries in the world for traffic deaths-judging by the number of fatalities per 10,000 licensed vehicles-were Ethiopia, Tanzania, Lesotho, and Kenya-all East African nations.

Moreover, these are all African countries in which the use of khat–an amphetamine-like plant drug that is the natural precursor of the designer drug known as mephedrone–is legal and common. The major khat-using countries in Africa are commonly listed as: Somalia, Kenya, Yemen, Ethiopa, Tanzania, Lesotho. Note the overlap. Khat, as one online article put it, is “the legal high of east Africa.”

On the tiny island nation of Mauritius, just off the southeast African coast, Touria Prayag writes at allAfrica.com that drivers “zoom past you, zigzag on the roads, nervously changing to the left lane to swiftly veer back on your side without any warning…. brazenly flouting the Highway Code in every imaginable dangerous manner…. And the carnage continues….”

In Ethiopia, annual road crash fatalities account for 114 deaths per 10,000 vehicles, compared to one death per 10,000 vehicles in Great Britain, and an average of 60 deaths per 10,000 vehicles across 39 sub-Saharan African countries. A report in the Bulletin of the World Health Organization (PDF HERE) notes that Ethiopian truck drivers “are regarded as so dangerous that their trucks are commonly referred to across Ethiopia as ‘al Qaeda.’” Anecdotally, Ethiopians told WHO officials that khat “increased driver confidence and vehicle speed while also making drivers irritable and impairing concentration,” and that high levels of khat could lead to hallucinations.

Since khat is legally available in most of East Africa, and comprises a significant part of the social fabric of local cultures, the use of khat is similar to the use of alcohol in higher-income nations. But does khat present the same threat of driving impairment as alcohol? Bolivia is now arguing its right to allow citizens to chew coca leaves in the traditional manner. Is it safe to drive and chew coca leaves? In all of these cases, the challenge is to determine what constitutes a “safe” dose of the drug; a dose that does not endanger people on or near the highway. There is not enough research on khat to answer that question. Nor is there a way to administer roadside tests for khat. The best evidence, African police officers say, is green teeth.

The active ingredients in khat-cathine and cathinone-are similar in structure to amphetamines, and chemically similar to the ingredients used in the manufacture of mephedrone powder. Mephedrone is sold as 4-MMC, Meow Meow, M-Cat, and other nicknames. Cathine and cathinone ramp up dopamine, serotonin and noradrenaline levels in a manner very similar to amphetamine, with many of the same positive effects (mild euphoria, reduced hunger, increased energy) and the same negative effects (depression, fatigue, lack of appetite, drug craving). It is thought that chronic use of khat results in dopamine D2 depletion in areas of the brain involved in goal-directed action.

The current fervor over mephedrone being disguised as bath salts or plant food for black market sales purposes in the U.S and U.K. demonstrates that this question is not academic for developed western nations. Sold as Ivory Wave, or Bliss, or White Lightning, mephedrone and other products containing cathinone are increasingly available across the U.S. states. In 2008, police seized 600 pounds of fresh khat-in Fargo, North Dakota.

A recent paper published inFrontiers in Psychology, authored by a group of Dutch and Spanish psychologists, appears to show that khat users exhibit a specific cognitive deficit: On stop-signal tasks, stop signal reaction time (SSRT) was significantly slower for the khat users. Such tests typically involve rapidly pressing a green “go” button upon seeing an arrow in certain positions, or abruptly aborting the response when the arrow turns red. The test measures “individual ability to stop a planned or ongoing motor response in a voluntary fashion.” For example, someone with Parkinson’s disease would score at the very high end of the SSRT scale.

The study itself involved 20 regular khat users recruited from the immigrant populations of Leiden and The Hague, and matched against 20 khat-free controls. All of the khat users met four or more of the 7 DSM-IV criteria for addiction, and did not consume alcohol the night before the test. The investigators speculate that this reduced level of inhibitory control “may even be involved in the emergence of addiction: the more a drug is used, the less able users are to prevent themselves from using it.”

The parallels to traffic signals and stop signs are obvious, and apt. The authors state that the findings of their study are “rather worrying because, first, many real-life situations require active inhibition of prepotent actions, as in the case of traffic lights turning red, or of criminal actions.” The obvious conclusion is that the chronic chewing of khat leaves “may indeed lead to a marked deterioration of cognitive functions (as inhibitory control) implicated in driving behavior.” Studies by NIDA director Nora Volkow and others have show that cocaine users suffer similar reductions in dopamine D2 receptors and “need significantly more time to inhibit responses to stop signals than non-users.” In general, stimulant drugs taken regularly at high doses appear to disrupt response inhibition due to alterations in dopamine functioning. (Although some studies have shown a facilitation of inhibitory control at lower doses).

The usual caveats apply: It is impossible to rule out pre-existing propensities for impulsivity, disinhibition, and the like. Some health researchers do not agree that the case for driving impairment on khat has yet been made. In theBulletin of the World Health Organization, Anita Feigin of the Centre for Population Health in Australia writes that, so far, much of the information is anecdotal, “and, as yet, there is no clear evidence of a causal relationship between the use of khat and traffic accidents.”African taxi drivers who immigrate to Australia use khat “to stay awake and alert.” However, Feigin notes that the use of khat has deeply divided the members of east African migrant communities.

It is an interesting conundrum. The developed West has its entrenched tradition of alcohol as a legal high, despite its side-effects, which frequently result in mayhem on the highways. On the other hand, the drinking nations must now contend with demands from other cultures for the decriminalization of khat and coca leaf, which, along with coffee and tea, make up a category we might call the “soft” stimulants.

Because of the connection with mephedrone and other amphetamine-like designer drugs, these questions will not be going away until more research provides some solid answers. Such research may not be long in coming: The NIH-funded Khat Research Program (KRP) at the University of Minnesota, for example, brings American researchers together with a broad group of scientists from Yemenese and German universities to study the effects of a common plant drug most Americans have never heard of-but a drug they may be dealing with in synthetic form sooner rather than later.