The Last Place You Would Look For Sound Advice 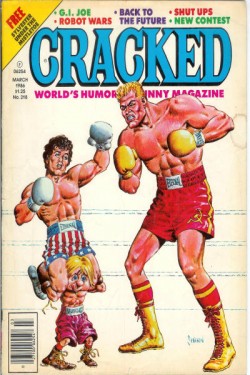 If you have ever gotten a good laugh from the internet, you may be familiar with the website CRACKED.com. I am not sure, but their logo is the same as that of a magazine that I read as a teen that was very much in the vein of MAD Magazine (it’s official I just wikied it ). If your not familiar with it, the site has some pretty funny writers and does a good job of bringing together funny things from all over the web, but be forwarned, it is adult humor and definitely rated R. That being said, I would like to repost a sanitized snippet of one of their recent lists entitled 5 Bits of Advice That Don’t Make Sense Until It’s Too Late by John Cheese. I was pleasantly surprised to find it on the site and a little clicking revealed that indeed Mr. Cheese is in recovery. The top two on his list of things grownups told us that we should have listened to were as follows:

I tend to harp on this a lot, and I’m about to do it again – your teens and early 20s are one of the most dangerous periods of your life. Those same hormones I mentioned earlier don’t just amplify the “feel good” emotions – they also work for the Dark Side. This means it’s also harder to tell the difference between what the grownups dismiss as being a “moody teenager” and a life-threatening problem.

For many, many years, I found myself getting irritable, sad, tired, angry, and even suicidal for no discernible reason, without provocation or warning. I’d lay in bed for hours, fantasizing about ways to just end it all because nobody understood, and there was nothing anyone could do to help me. If I was gone, the world would be a better place.

I had heard of depression, and I knew the definition, but I didn’t really know what it was. It wasn’t until years later when I started taking psychology classes that I began to get a deeper insight as to what was making me involuntarily goth out for most of my life. And as it turned out, it’s pretty hard to fight a monster if you don’t know that one is there in the first place. Recognizing depression when it hits is half the battle.

Luckily, the Internet now exists, so access to that information doesn’t require any other action than clicking this link.

Why You Won’t Believe it for Years:

Unfortunately, even if I had the internet back then, and the link was handed to me, and someone was there to click it, and another person held my eyes open, and another read the page to me through a megaphone, I still wouldn’t have absorbed the information. Depression has a way of doing that to a person, it tricks you into defending it against all attacks. You will feed and protect your misery like it’s your first born baby.

But the odds are that nobody would have given me the link anyway. Society was – and still is – in the dark ages when it comes to any kind of mental or emotional problems. Practical advice on dealing with your own emotional swings is not a subject you’ll find being taught at schools or home or… pretty much anywhere. To this day, if you need physical therapy on a knee you sprained playing football, you’re a badass. But if you need mental therapy, even simple counseling, you’re crazy. Damaged. All talk of it is awkward, the subject of jokes to be made when they’re well out of earshot. So the stigma keeps us at home, quietly accepting that there’s something wrong with us. Something shameful.

The reality is that seeing somebody about depression (or anxiety, or anything else) is no harder than going to see a doctor about that rash on your ass. Yeah, it’s awkward and intrusive but you get over it, you don’t just let it spread until you’re bedridden. You call, you make an appointment, you see what needs done. Shake off that shame you feel about needing help before it murders you.

But understand this (and if you’re in the age group I’m talking about, I hope to God that I’m wrong about you not getting this for years): You have more people who care about you than you think. Back when I was fighting that demon (I like to picture myself using a giant anime sword that’s on fire), I swore on my soul that not a single person in the world gave a shit whether I lived or died. As I got older and that smothering black veil lifted, I realized how incredibly wrong I was. There were dozens of people who would have been negatively affected by my early check-out.

You’ll find the same. Even if it turns out that number is two, that should mean something to you because it translates to this: Those two people live in a better world simply because you draw breath.

#1. Stop and Figure Out How Much Partying You Can Handle

Statistically, almost every teenager reading this article will try booze or drugs before they graduate. I’m the last guy in the world who is going to burst through the doors and break up the party – I’ve drank enough alcohol and done enough drugs in a single night to put any random four of you in a grave. And this is the last thing you want to hear, because the whole point of partying is that for one night you don’t have to worry about a bunch of shit. So I’m not going to be the asshole who starts preaching about childhood obesity to trick-or-treaters on Halloween. I had my fun, you should have yours.

But, there’s a huge yet invisible difference between innocent experimentation and addiction, and when it decides to blindside you, it happens hard and fast. It’s important that you recognize it before that happens. And, just like with the mental health example, society isn’t great about giving you the tools because parents prefer to just tell you to never touch the stuff instead. You’re probably not going to listen to that, so you wind up with no help at all.

My advice isn’t complicated, and if you respect yourself or anyone you know at all, I ask you this one simple favor that will take five minutes per month. It’s as easy as reading a grocery list. Bookmark that link, and once a month, visit it. Mentally check off any of those things that apply to you. If you have even one, it’s not a good sign. But as you check things off, if you find that your mental pen is starting to run out of ink, it’s time to take some serious steps towards finding an adult to talk to.

This wasn’t a “find out five years later” case for me. It ate a third of my total lifespan, and I let it.

As I always point out with this issue, there are millions of people out there who can party with the best of them and then walk away unscathed. They can forget about it the next day and not come back to it for months or years at a time. Maybe you’re one of those people, and I won’t be the guy who points a finger in your face and tells you that you’re wrong. All I’m asking is to visit that site. Give it an honest read… and if you find yourself checking off more and more of those points, come to terms with the idea that unless you put a stop to it, it’s going to hurt you and everyone you love.

Why You Won’t Believe it for Years:

You spend years in school listening to D.A.R.E. programs (or whatever anti-drug stuff they do where you live) telling you that one hit off a joint will put you in a coma. Then you actually try the stuff and realize that’s bullshit, so you immediately ignore all other warnings, too. It’s all the same shit – puritanical adults clutching their pearls at the thought of spending Friday night ingesting anything other than Bible verses. Right? It’s hard to imagine that your parents were in college too, at one point, and may have owned more than one bong. So trying to separate the anti-drug propaganda from the useful warnings becomes next to impossible. Especially when you’re young and healthy and invincible, and your hangovers are over after breakfast.

And hell, once you’re in college, that’s all about drinking, right? That’s the stereotype. The weird kids are the ones who aren’t getting wasted. And in the years after, you don’t take kindly to words like “alcoholic” and “addict” because they’re not a diagnosis – they’re insults. They’re terms used to describe selfish, weak people who ruin families. Nobody wants to be that. Even if you find that you are addicted, you sure as hell can’t admit it.

So you’ll ignore it – I ignored mine for 22 years before I finally swallowed my pride and admitted that I had a problem. You’ll make excuses like, “I have a job. I’m a good mother/father. I pay my bills. I’m not hurting a damn thing – I’m an adult, and this is my decision.”

Yep. I did that too. In fact, here’s over 120 pages of people coping with that very thing on our own forums. And what every single one of us have found is that at some point with addiction, it stops being your decision. You lose control over it, and using becomes involuntary. Willpower has nothing to do with it at that point.

But the biggest reason this gets prolonged is because nobody can tell you that you’re addicted to something. It doesn’t work that way because, just like me, most people will take it as name-calling and get defensive. The only way to start this process is for you to realize it and admit it to yourself. A lot of people don’t have that kind of courage and self reflection. Do you? Here’s that link again, just in case.