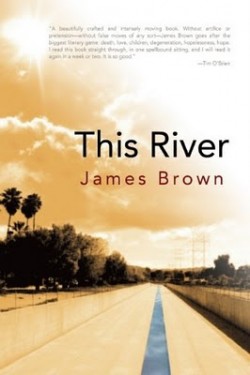 Review of “This River” by James Brown.

James Brown, author of “The L.A. Diaries,” has offered up another candid and courageous memoir in his new book,“This River.” In a series of related vignettes, the book amplifies and extends the basic story of Brown’s life as chronicled in “L.A. Diaries,”–a harrowing tale of genetic fate and social failure; a dysfunctional family riven by alcoholism and drug addiction, culminating in the suicide of the author’s brother, followed by the suicide of his  sister.

Throughout his descents into hard drug use, his ups and downs along the alcoholic’s rehab trail, Brown remains a fierce observer of his own behavior, and, heartbreakingly, its effect on those around him: “Worrying, damaging, terrorizing those closest to us, intentionally or not, is what alcoholics, addicts, and the mentally ill do best.” As was true of “The L.A. Diaries,” Brown writes in a spare, direct, unflinching style-a bracing antidote to the Stuart Smalleys of the world.  His observations on A.A., anti-craving medications, and antipsychotic drugs are those of a man unwilling to let prior prejudices and built-in excuses deter him from a search for the true nuts and bolts of his condition.

Reaching that point of understanding, and comprehending the need for action-none of it typically comes fast, cheap, or easy. Brown, who teaches in the MFA program at Cal State San Bernardino, masterfully captures the internal monologues of the addictive mind:

“Getting hooked is for weaklings, the idiots who can’t control themselves, those losers who end up broke and penniless, wandering the streets at night like zombies, like the walking dead…. For the budding addict, the supply is never enough, but your only regret, at least to date, is that you didn’t come across this miracle potion sooner.”

The internal dialog eventually becomes an existential struggle: “True or not, I resist the idea that mental illness and alcoholism are somehow inborn. Accepting that premise means embracing the notion of fate, and I don’t. I prefer to believe that I’m in full control.”

As who among us does not. And although none of us are truly in full control-we are all a conflicting welter of “I”s, of shifting identities and roles-it is through the dissociations characteristic of addictive illness that the Jekyll and Hyde nature of these changes, which are somehow “in the blood,” sometimes manifest themselves most graphically.

Does the author prevail? He does, for now, and that is how we must leave it:

Things are changing deep inside you and have been for some time: hormones, genes, brain chemistry, all of it adapts to the alcohol and drugs you continually dump into your body. The cells habituate. The cells literally mutate to accommodate your cravings and now they crave too. Now your addiction has more to do with physiology than psychology. Now it’s the body that robs the mind of its power to choose, and it’s not long before you’ll wish you never came across that miracle potion, those powders and pills.

With suberb jacket reviews from the likes of Tim O’Brien, Robert Olmstead, and Duff Brenna, “This River” is a short read that will lodge itself firmly in your memory.  I read it in one sitting, and I bet you do, too.