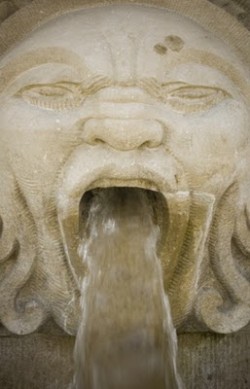 A case history of cannabinoid hyperemesis.

Cannabinoid hyperemesis, as it’s known, is an extremely rare but terrifying disorder marked by severe episodic vomiting that can only be relieved by hot baths. (see earlier post). Sufferers are heavy, regular cannabis users, most of them. And hot baths? Where did THAT come from?

The syndrome was first brought to wider attention earlier this year by the anonymous biomedical researcher who calls himself Drugmonkey.  Drugmonkeydocumented cases of hyperemesis that had been reported in Australia and New Zealand, as well as Omaha and Boston in the U.S. “There were two striking similarities across all these cases,” Drugmonkey reported. “The first is that patients had discovered on their own that taking a hot bath or shower alleviated their symptoms. So afflicted individuals were taking multiple hot showers or baths per day to obtain symptom relief. The second similarity is, as you will have guessed, they were all cannabis users.”

The reports haven’t stopped. This summer, an intriguing account appeared on the official blog of New York University’s Division of General Internal Medicine, where med students offered a formal definition: “A clinical syndrome characterized by intractable vomiting and abdominal pain associated with the unusual learned behavior of compulsive hot water bathing, occurring in the setting of long-term heavy marijuana use.”

Listen, doubters. My son has this. He has been cyclical vomiting and spending hours in boiling hot baths since last Autumn. It’s getting worse and he has lost a hell of a lot of weight. He is 21 and an addicted, heavy cannabis user who started at 15. He has tried cutting down but every other joint of weed brings on the obsession. He refuses to co operate with medical staff who try to treat him.

He has been taken to numerous hospitals as an emergency for non-stop vomiting and begs medical staff to let him sit in a very hot bath. They try the best anti-vomiting drugs instead, to no effect, and then some let him go in a hot shower for an hour plus. He always ends up on a drip and as soon as he feels well enough, discharges himself, often the same day.

At the weekend he went to a sports event in the city with friends, realised on the way he was going to have an episode, so left friends and made his way into a hotel room and locked himself in. Police were called and got him out of a boiling hot bath against his will. Cue vomiting attack so bad police called an ambulance. Once again discharged himself from hospital, demanding drip be removed or he would do it himself. Has sat in bath at house he shares with girlfriend for at least 12 hours today, she tells me. She says water is so hot she has no idea how he bears it.

He says he has no pain in stomach, just a sensation that drives his head mad and he KNOWS it will not go, or the vomiting stop, until he gets in boiling hot bath and stays there. He has even done this while abroad on holiday and ended up on a drip before being flown home.

All of this is true. A mother.

I was intrigued, and discussed this briefly with the mother, who lives in the U.K. She added a number of details in an email exchange, and agreed to let me publish her comments:

“I am a mother in the UK whose son definitely has this, but is not officially diagnosed as he ‘escapes’ medical attention by discharging himself from various hospitals.

When it happens he is desperate to get in a hot bath. He lives with his girlfriend. I only realised what the hell was really going on when she insisted on telling me, and have since been regularly involved in the hospitals saga.

When I discovered the truth I put ‘cannabis’ ‘vomiting’ and ‘hot baths’ ‘showers’ in google and up came a perfect description of what my son does.

I am trying to get him to agree to go for counselling and psychiatric help as he has reached the stage where this obsessive vomiting and bathing is wrecking his life. But every time he gets a little better he believes he can ‘control it’ which is not the case at all.

Yes – we end up in the hospitals and the first young emergency doctor who has ever smoked a joint and/or thinks he knows everything, tells J “Oh no it can’t be that, cannabis stops vomiting, not starts it.” Of course, they have never heard of this condition and just think he is being irrational because of the constant need to vomit. They are sure it is food poisoning or some kind of spasm and take basic blood tests.

They find nothing, insist on giving him the best anti-sickness drugs usually for cancer patients and so on…, saying “this will definitely stop it” and still he vomits. He is not in pain, just rapidly dehydrating and panicking and complaining of a weird sensation in his stomach. He tells them “I know it’s in my head doing this” and desperately demands to get in a bath. Even when he has arrived at hospital because police found him in a boiling hot bath, this makes no sense to the medics who only give in when none of their drugs work. He then immediately stops vomiting but is petrified of getting out of the bath. Eventually, when he says it is under control, he agrees to get out, and is put on a drip. Approx an hour later, while the doctors are planning follow-up procedures like scans and more complex blood tests etc, he starts an argument with a nurse, insists the drip is removed and phones a friend to collect him, avoiding seeking a lift from me if he can. The over-pressed doctors here (the British system is like a cattle market) are left mystified and move onto the next emergency in their pile up of admissions. And so it goes on, and will do, until J accepts even the odd joint can set him off.”
—-

Researchers speculate that it has something to do with CB-1 cannabinoid receptors in the intestinal nerve plexus–but nobody really knows for sure. Low doses of THC might be anti-emetic, whereas in certain people, the high concentrations produced by long-term use could have the opposite effect.