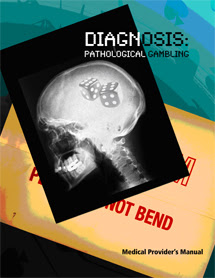 The DSM-V is set to label problem gambling an addiction.

Nobody has ever bet enough on the winning horse. – Unknown wise person

I used to gamble. Back when I did, I was also an active alcoholic and a chain smoker. Camel filters, if you’re wondering. And we had a running joke, my wife and I, although the humor leaked out of it for her pretty quickly. We would breach the doors of the gambling palace, and plunge into the dark, icy interior of a casino at Las Vegas or Tahoe, and stand on the edge of the gaming room, taking it all in for a moment. “Ah,” I would say, surveying the roomful of cigarette smokers with drinks in their hands, making bets or hitting buttons at one o’clock in the morning, “my kind of people.”

Gambling can be defined as an activity in which something of value is put at risk in a situation where the outcome is uncertain. That’s really all there is to it. Howard J. Shaffer and Ryan Martin, whose article in the Annual Review of Clinical Psychology, “Disordered Gambling: Etiology, Trajectory and Clinical Considerations,” takes on all the interesting questions about gambling as an addictive disease, have chosen to favor the term “disordered gambling.” Just as there are divisions between alcoholic drinking, heavy drinking, and social drinking, there are similar states we can call pathological gambling, excessive gambling, and social gambling. On the problematic end of the scale, pathological or problem gambling has proven to be “a more complex and unstable disorder than originally and traditionally thought.” No kidding. Once the neurophysiology of the gambling state of mind came under scrutiny, the parallels with addiction cropped up so rapidly that investigators have been hard pressed to come up with suitable explanations for it all.

The new DSM-V proposes to shift pathological gambling from “impulse control disorder” to the new category of “addiction and related disorders.” So it’s a good time to rethink the question along with the psychiatric community.

Next, researchers got technical, wondering whether certain types of gambling, or certain types of gambling machines, were more “addictive” than others. They quickly ran into the same kind of trouble substance abuse researchers got into when they first tried ranking drugs according to strict hierarchies of addictiveness. In so doing, the staggering metabolic diversity of the human animal got lost in the shuffle, as did the fact that my metabolism and my behavior when taking drugs, or knocking one back, or losing money in a casino, is going to be different from yours.

Then came Internet gambling. In 1996, the first online casino to accept real money began operation, and by 2001, there were more than a thousand.Previously, researchers had to rely mostly on the time-honored but not always accurate system of self-reporting. If you ask people why they gamble, they tend to answer that they do it for the fun, the excitement, the challenge, and the chance to win some money. But what gamblers can’t recall very well are specific patterns of play over time that might benefit researchers. For example, in a 2009 study in which observers actually watched gamblers gambling, one long-standing observation from the self-report literature-gamblers become more liberal risk takers as they approach the end of a gambling session in a behavior called “chasing”-didn’t prove out. When researchers watched actual gamblers in action on the Internet, or playing lotteries, they found that problem gamblers in fact began betting more conservatively as they approached the end of their gambling, the authors write.

Another approach is to consider risk factors of all kinds-neurobiological, psychological, and social-and look for similarities between those for substance addiction, and those for “activity-based expressions of addiction.” The “syndrome model,” or what I usually call the umbrella model, derives from neurobiological research suggesting that “addictive disorders might not be independent: each outwardly unique addiction disorder might be a distinctive expression of the same underlying addiction syndrome…. The specific objects of addiction play a less central role in the development of addiction than previously thought….”

All of this opens the door to some informed speculation about a broader range of disorders that may lurk beneath the umbrella of the addictive disease concept. Among these are such conditions as body dysmorphic disorder, bulimia, depression, and extreme PMS, which are all found more often in addict populations. In addition, impulsivity and low “harm avoidance” are behavioral traits often found in association with addiction. Shaffer and Martin call these “shadow syndromes,” and they are found to be associated with BOTH substance and behavioral addictions.

But what, exactly, is the high in gambling? The researchers believe that, “similar to ingesting stimulants, there is evidence that gambling is associated with autonomic arousal including elevated blood pressure, heart rate, and mood.” That’s not very specific, and could also describe a craving for teddy bears. But recently, fascinating evidence of neurobiological influences on gambling arose when Parkinson’s’ patients on strong dopamine agonist treatments, with no history of gambling whatsoever, began behaving for all the world like pathological gamblers. I cannot imagine a better suggestion of neurogenetic involvement than this unexpected finding. Previous research had shown that dopamine-active drugs were capable of increasing the incidence of other addictions, too. Shaffer and Martin list compulsive eating, compulsive sexual behaviors, and compulsive shopping as activities that can also be boosted with dopamine agonists or diminished by lowering dopamine activity.

And it does not strike me as surprising to learn that, yes, gambling problems tend to run in families, or that twins studies show that pathological gambling is higher among twins born to pathological gamblers than twins born to non-gamblers. It is the same evidence anyone can bring forth to bolster the argument for neurobiological influences on alcoholism, heroin addiction, and the like. “In sum” Shaffer and Martin conclude, “genetic influences might not determine the development of specific expression of addiction; however, genetics does influence the risk of addiction in general.”

So when I used to stand on the edge of the casino floor, as an alcoholic and a nicotine addict, casually calling those gamblers my kind of people, I think I was more right than I ever could have guessed.

Does all this mean that playing games on the Internet is an addictive behavior if making bets with real money is involved? The authors crunched the studies on that question, and discovered that maybe 1% of the Internet population has used the Internet for gambling purposes, and that “the case of Internet gambling provides little evidence that exposure is the primary driving force behind the prevalence and intensity of gambling…. The relationship between the extent of gambling ‘involvement’ is a better predictor of disordered gambling than any particular game that people play.”

By gambling involvement, the authors mean the number of different kinds of games a gambler plays. The more he or she plays, the more likely they are, or are likely to become, problem gamblers. However, it’s not hard to see where the online notion came from. Gambling folklore has always held that addiction is more of a risk with electronic gambling devices like slot machines and 5-Card Draw machines, than with traditional table games like roulette and craps. But the authors don’t find any convincing clinical evidence for this assertion at all. Internet gambling isn’t more addictive, and doesn’t confer any extra risk on people participating in other forms of gambling.

Here is a list of potential gambling behaviors that Shaffer and Martin believe might be risk factors to look out for in the development of problem gambling, with my additions in parentheses showing the connections to other drug addictions.

—Betting Intensity: how many bets per day. (With alcohol, how many drinks.)

—Gambling Trajectory: tendency to increase the amount of wagered money. (Tolerance, in the case of drugs and alcohol.)

But if we list gambling under Addiction and Related Disorders, must we list all the possible variations on the theme-shopping and sex and all the rest, even though the picture is still fuzzy? No, the authors argue, we don’t. Not right this minute. But gambling is ready to join the roster. Shaffer and Martin would like to see their syndrome model of addiction used to identify “core features of addiction and then illustrate these with substance-related and behavioral expressions of this diagnostic class. Conceptualizing addiction this way avoids the incorrect view that the object causes the addiction and shifts the diagnostic focus toward patient needs.”