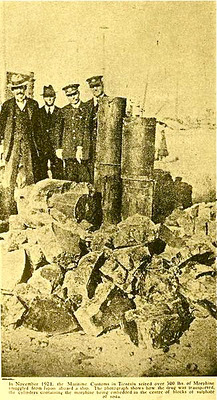 An essay on the Harrison Narcotic Act of 1914.

As the 20th Century began, America’s drinking habits were undergoing a thorough review. But In late 1914, five years before the prohibition of alcohol became the law of the land, the government also took aim at other drugs. The legal status of heroin and cocaine changed overnight with the passage of the Harrison Narcotic Act. The U.S. Congress, with the vociferous backing of William Jennings Bryan, the prohibitionist Secretary of State, voted to ban the “non-medical” use of opiates and derivatives of the coca plant.

Under the Harrison Act, physicians could be arrested for prescribing opiates to patients. “Honest medical men have found such handicaps and dangers to themselves and their reputation in these laws,” railed an editorial in the National Druggist, “that they have simply decided to have as little to do as possible with drug addicts…” The Harrison Act did have the effect of weeding out casual users, as opium became dangerous and expensive to procure. Housewives, merchants, salesmen, and little old ladies who had been indulging in the “harmless vice” now gave it up.

By 1919, continued pressure from the alcohol temperance movement culminated in Congressional passage of the Volstead Act, which provided for federal enforcement of alcohol prohibition. The temperance activists had pulled it off, though there is nothing very “temperant” about total prohibition. A year later, the states ratified the 18th Amendment. Within a five-year period, morphine, cocaine, and alcohol had all been banned in America. The Prohibition Era had begun. At roughly the same time, alcohol prohibition movements were sweeping across Europe, Russia, and Scandinavia, as evidenced by this 1921 news photograph of Chinese Maritime Officers with 300 lbs of smuggled morphine confiscated in cylinders shipped from Japan.

Prohibition and the passage of the Harrison Narcotics Act coincided, as well, with a short-lived effort to prohibit cigarettes. Leaving no stone unturned in the battle to eliminate drugs and alcohol from American life, Henry Ford and Thomas Edison joined forces to wage a public campaign against the “little white slavers.” Edison had shown an earlier fondness for Vin Mariani, a French wine laced with prodigious amounts of cocaine, but he and Ford wanted to stamp out cigarette smoking in the office and the factory. Although that effort would have to wait another 75 years or so, and may yet become the next large-scale test of federal prohibition, New York City did manage to pass an ordinance prohibiting women from smoking in public. Fourteen states eventually enacted various laws prohibiting or restricting cigarettes. By 1927, all such laws had been repealed.

As Prohibition continued, police and federal law enforcement budgets soared, and arrest rates skyrocketed, but no legal maneuvers served to make alcohol prohibition effective, once “respectable” citizens had chosen not to give up drinking. The experience was so repellent that even today, when drug legalization is considered a legitimate topic of debate, most American reformers are unwilling to argue the case for neo-prohibitionism. (America’s ambivalence over alcohol is still evident in some states, where “dry” counties have made the sale of liquor illegal from time to time.)

As the temperance crusaders faded away, politicians and the public turned their attention back to heroin addiction, as the opiates became the official villains again. However, one practice that remained quietly popular with an older generation of physicians well into the 1940s was the conversion of alcoholics into morphine addicts. The advantages of alcohol-to-morphine conversion were spelled out  by Lawrence Kolb, the Assistant Surgeon General of the U.S. Public Health Service at the time:  “…Drunkards are likely to be benefited in their social relations by becoming addicts. When they give up alcohol and start using opium, they are able to secure the effect for which they are striving without becoming drunk or violent.” Perhaps so, but there were plenty of doctors who did not believe that addiction of any kind fell within the scope of medical practice in the first place.

Subsequent laws tightened up the strictures of the Harrison Act. Mandatory life sentences were imposed in several states for simple possession of heroin. The first addict sentenced to life imprisonment under the new laws was a twenty-one year-old Mexican-American epileptic with an I.Q. of 69, who sold a small amount of heroin to a seventeen year-old informer for the FBI. (In 1962, the U.S. Supreme Court ruled that imprisonment for the crime of simply being an addict, in cases where the arrest involved no possession of narcotics, was cruel and unusual punishment in violation of the Bill of Rights.)

The Prohibition Years also sparked a rise in marijuana use and marijuana black marketeering. To checkmate the migration toward that drug, Congress passed the Marihuana Tax Act of 1937, modeled closely after the Harrison Act. The American Medical Association opposed this law, as it had opposed the Harrison Act, but to no avail. The assault on marijuana was led by Harry J. Anslinger, the indefatigable U.S. Commissioner of Narcotics who served a Hoover-like stretch from 1930 to 1962. At one point, Anslinger announced that marijuana was being taken by professional musicians. “And I’m not speaking about good musicians,” he clarified, “but the jazz type.” Due in no small part to Anslinger’s tireless public crusade against “reefer madness,” additional state and federal legislation made marijuana penalties as severe as heroin penalties. The most famous early victim of Anslinger’s efforts was screen actor (and reputed jazz fan) Robert Mitchum, who was busted in 1948 and briefly imprisoned on marijuana charges.

One highly addictive drug that did not immediately fall under the proscriptions of the Harrison Act was a cocaine-like stimulant called amphetamine. Originally intended as a prescription drug for upper respiratory ailments and the treatment of narcolepsy (sleeping sickness), the drug was first synthesized in 1887 by a German pharmacologist. It was a British chemist named Gordon Alles, however, who showed everyone just what amphetamine could really do. There was no direct analog in the plant kingdom for this one. Alles, who also worked at UCLA and Caltech, documented the remarkable stimulatory effect of “speed” on the human nervous system-research that led directly to the commercial introduction of amphetamines in the late 1930s under the trade name Benzedrine. Once it became widely available over the counter in the form of Benzedrine inhalers for asthma and allergies, it quickly became one of the nation’s most commonly abused drugs, and remained so throughout the late 1950s and 1960s-with periodic comebacks.