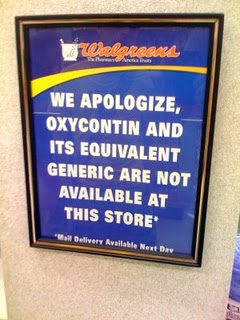 Epidemic of Oxycontin theft at Walgreens.

ROCHESTER, NH– Police are looking for a suspect who robbed the Walgreens Pharmacy on South Main Street early Sunday morning. According to Sgt. Gary Boudreau, police responded around 2 a.m. to the Walgreens at 104 South Main Street for a reported robbery. Boudreau said a single male entered the store, proceeded to the pharmacy counter and passed a note demanding certain prescription medications. The suspect left the store with an undisclosed amount of OxyContin, Oxycodone and Xanax.

COLORADO SPRINGS, CO–The Colorado Springs Police Department’s Robbery Unit is seeking assistance identifying the suspect in the Aggravated Robbery of the Walgreens located at 4713 Flintridge Dr in Colorado Springs on January 4, 2011 at 4:22 pm. During the robbery the suspect approached a pharmacist, threatened he had a weapon and demanded Oxycontin. The suspect fled the store with an undisclosed amount of Oxycontin.

WESTBROOK, CT–State Police are investigating strong armed robbery at a Walgreens in Westbrook. State Police say a man entered the Walgreens and demanded narcotics from the pharmacist around noon on Thursday. Police say he made off with more than 100 OxyContin pills.

TIGARD, OR–The Tigard Police Department is investigating a robbery that occurred Monday afternoon at the Walgreens store at 13939 S.W. Pacific Highway. An employee called 9-1-1 to report the incident at approximately 5:10 p.m.  Police officers arrived and began searching for the robber, who had  demanded OxyContin from an employee at the prescription counter. The robber displayed and threatened the employee with a black handgun, police said.

POST FALLS, ID— Investigators hope surveillance footage will help them catch a pair of Oxycontin robbers who hit a Post Falls Walgreens Sunday. Police say two men walked into the Walgreens at 706 E. Seltice Way at about 11:00 a.m. and approached the pharmacy counter. One of the men handed an employee a “threatening note”, demanding the powerful painkiller. The clerk complied with the note and handed over an unknown amount of pills.

LEXINGTON, KY–Police are looking for a man who stole more than 700 prescription pain pills at gunpoint from a Lexington pharmacy early Monday morning. Witnesses said a man wearing blue jeans and a gray hooded sweatshirt with the hood up entered the store, displayed a handgun and demanded OxyContin tablets. He appeared to be about 6 feet 3 inches tall and about 180 pounds. He drove away in a brown pickup truck after bagging 772 pills, according to a police report.

SPOKANE, WA–OxyContin robberies in Washington have prompted an unprecedented response from one of the nation’s largest pharmacy chains. New time-delayed safes have been installed in Walgreens pharmacies across the state to hold supplies of the powerful painkiller. The timed locks take several minutes to open, halting immediate access to a prescription drug that’s prompted about a dozen robberies at Spokane County Walgreens stores since last fall, often at gunpoint or knifepoint.