So, Like, We’re Watching The LSD Episode Of The Fringe… 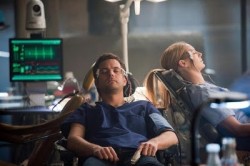 So this guy I know? Like really, really well? He’s over at my place and we’re watching The Fringe on TV and smoking a bowl, excuse me, we’re vaping a bowl, he’s an older guy and all concerned with his health and shit. So we’re watching the Lysergic Acid Diethylamide episode of The Fringe, and Walter’s rapping away like a drunken monkey as usual, and they’re hardly underway before my friend is jumping up off the couch and saying no, that’s not what LSD was like…. I said how would I know, and anyway the clothes in those Sixties photos always looked so bad, they must have looked even worse when you were tripping on that stuff.

The closest thing I’ve ever had to a psychedelic experience was that time that guy slipped a roofie in my Mimosa. But I digress. My friend says no, no, see, when you took acid, you didn’t suddenly get hurled into somebody else’s consciousness, which in this case seems toresemble some crowded city out of Inception, with your tripping buddy perched on a bus, waving at you. That’s just not fucking how it went. So then he pauses, gets kind of sheepish, says, well, actually, that did happen once, but that’s not the point. And then blah blah happened.

And everybody could read everybody else’s mind. And from then on everything was blah blah blah. And peace reigned forevermore. Okay, that’s not fair, he’s really just complaining that they aren’t telling it straight, about how LSD really feels, and what you really see and shit. This notion about taking drugs and ending up in cities full of people wearing black clothing really cracked him up. So I go, when was the last time you took a walk down Lake Street and saw somebody wearing some other color? But he loved the black guy who accidentally dosed himself and then started comparing his stick of red licorice to Bernini’s spiral altar at St. Peter’s. But car chases? Elevators? The Twin Towers, for God’s sake? Where are the colors, the tracers, the melting edges, the fractal glow of a universe in constant motion? Or something like that.

My friend wants to know how they thought they were going to get away with it. Turning it all into a cartoon. And not just any cartoon, but that awful rotoscoping shit that made him seasick when we rented “A Scanner Darkly.”  Like they thought nobody who had ever taken the stuff was going to watch their crappy show, anyway? Whatever. But I thought that last part was cool, the cartoon guys were running to catch a giant purple blimp, like an episode of the Teenage Mutant Ninja Turtles-and chased by zombies!  And more car chases! Too cool! And my friend is laughing, and then he says yeah, well, something like that happened to him once, too….