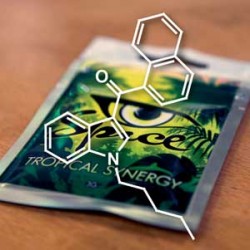 The U.S. Drug Enforcement Administration (DEA) exercised its emergency scheduling authority yesterday to outlaw the use of “fake pot” products.

Sixteen states have already passed a mishmash of legislation outlawing one or more of the drugs in question, which are typically sold as Spice, K2 or Red X.

The DEA had already announced its intention to put 5 new drugs–JWH-018, JWH-073, JWH-200, CP-47, 497, and cannabicyclohexanol–on the official list of scheduled substances. “These products consist of plant material that has been coated with research chemicals that claim to mimic THC, the active ingredient in marijuana, and are sold at a variety of retail outlets, in head shops, and over the Internet,” the DEA said in a prepared statement.“The temporary scheduling action will remain in effect for at least one year while the DEA and the United States Department of Health and Human Services (DHHS) further study whether these chemicals should be permanently controlled.”

According to the DEA, “Emergency room physicians report that individuals that use these types of products experience serious side effects which include: convulsions, anxiety attacks, dangerously elevated heart rates, increased blood pressure, vomiting, and disorientation.”

The smokable herbal products were designated as Schedule 1 substances, the federal government’s most restrictive category, ostensibly reserved for drugs with “no accepted medical use for treatment in the United States and a lack of accepted safety for use of the drug under medical supervision.” Marijuana is also a Schedule 1 drug, along with heroin, Ecstasy, and LSD. The supposedly less dangerous Schedule 2 drugs, bizarrely, contain the most problematic drugs of all in terms of human health and addictive potential: methamphetamine, oxycontin, and cocaine. Schedule 3 is so confusing as to defy coherent description, while Schedule 4 is the valium category and Schedule 5 is the Robitusson category.

One problem with the whack-a-mole approach to drug enforcement is that developers of designer drugs can easily stay one jump ahead of the law. What many drug officials and agencies, including the International Narcotics Control Board, want to see is sweeping, generic bans on whole categories of chemicals, in order to win the game of leapfrog.

However, as reported by Maia Szalavitz at Time Healthland, broad-spectrum drug bans “could have the unintended effect of keeping potential cures for diseases like Alzheimer’s out of the pharmaceutical pipeline.” As Szalavitz notes, “getting a drug out of Schedule 1 is much harder than getting it into that legal category, as supporters of medical marijuana and MDMA have discovered.”

And if clinical researchers wish, say, to pursue JWH-133–a chemical compound closely related to the newly banned drugs-for its ability to reduce the inflammation associated with plaque buildup in the brains of people with Alzheimer’s, they are going to find that research almost impossible to do, as more and more chemicals escape the lab or emerge from the work of underground chemists and ultimately become illegal substances.