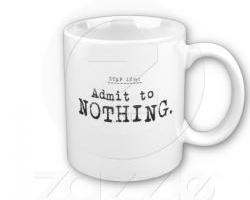 A Minneapolis businessman has come up with a “Step 12 1/2” for recovering alcoholics — the fun part.

According to a report in theMinneapolis StarTribune, Barry Rubin has a friend whose daughter has been through the Alcoholics Anonymous program several times.

Rubin said when he would talk with his friend, the daughter would regularly interject a 12-Step lingo. “She would say, ‘You know, Barry, you must really make amends.’ And I’d say, ‘What step is that?’ She would tell me.”

Rubin thought this was all pretty funny stuff. “I would just start laughing about it,” he said. “So I called up my lawyer and said, ‘Is “Step 12 1/2″ available for copyright?’ He said yes, and I said, ‘Why don’t you get it for me?'”

So Rubin wrote-up 20 “anti-12-step” slogans, which he had printed on coasters, T-shirts and tote bags.

Those slogans include: “I’m not willing to make amends: They DESERVED it,” “What a WASTE of 28 days,” “Treatment is for QUITTERS” and “We know WHO YOU ARE.”

“I took Step 12 1/2 and I wanted it turned into something that people [who] were going through AA and other people could have a sense of humor about. The universal caveat, on the back of every one of the coasters, is ‘Never drink and drive, period,'” said Rubin, who is giving a percentage of profits to chemical prevention agencies.

“So when you buy the coasters, even though they are making fun of Alcoholics Anonymous and the people in AA, you are contributing to the chemical dependency program. Coincidentally, the biggest customers have been AA people.”