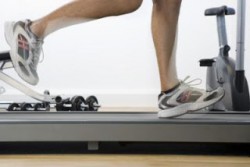 The curious connection between exercise and getting high.

A Vanderbilt study published in the journalPLoS ONEhas confirmed what readers of Addiction Inbox have known for some time: Exercise often helps to curb cravings for addictive drugs. The Vanderbilt paper is noteworthy for focusing on heavy marijuana smokers (6 joints per day) who had not expressed any interest in quitting. Yet, at the end of a modest two-week exercise regimen, the participants reported less cannabis use.

Last August, I wrote about a growing body of research suggesting that the runner’s high and the cannabis high were more similar than previously imagined. Investigators wired up college students, put them to work in a gym, and found that “exercise of moderate intensity dramatically increased concentrations of anandamide in blood plasma.”

The British Journal of Sports Medicine ran a research review, “Endocannabinoids and exercise,” which seriously disputed the “endorphin hypothesis” assumed to be behind the runner’s high. The primary problem is that the opioid system is responsible for respiratory depression, pinpoint pupils, and other effects distinctly unhelpful to runners and other strenuous exercisers.

Compared to endorphins, the analgesia produced by the endocannabinoid system is much more consistent with the demands of exercise. Very high doses of marijuana tend to have a sedating effect, but low doses tend to induce activity or hyperactivity. There are cannabinoid receptors in muscles, skin, and the lungs. Moreover, “cannabinoids produce neither the respiratory depression, meiosis, or strong inhibition of gastrointestinal motility associated with opiates and opioids,” according to the research review. “This is because there are few CB1 receptors in the brainstem and, apparently, the large intestine.”

In addition, in my 2008 post entitled “Battling Addiction with Exercise,” I highlighted director Nora Volkow’s remarks at a NIDA-sponsored conference on addiction treatment and research. “Exercise has been shown to be beneficial in so many areas of physical and mental health,” Volkow said. “This cross-disciplinary meeting is designed to get scientists thinking creatively about its potential role in substance abuse prevention.”

At the same conference, Dr. Bess Marcus of Brown University, working on a NIDA-funded study of exercise for smoking cessation, presented the scientific evidence for the addiction/exercise connection. Similarities in the effects on the reward pathways of the brain’s limbic system–dopamine activity in particular–may tie the two behaviors together more directly than previously thought. Among the findings:

–Baby monkeys who don’t roughhouse with their peers have higher levels of impulse control problems and alcohol use when they get older.

–In humans, exercise is known to reduce stress and tension–and anxiety is a well-known side effect of withdrawal, from alcohol and cigarettes to heroin and speed.

–Physical activity may enhance cellular growth in key areas of the brain involved in addiction, thereby aiding the neural changes that take place during detoxification and withdrawal from addictive drugs.