Washington’s Headaches Caused By More Than Just The Dow 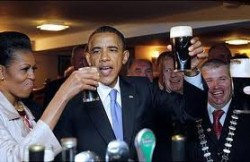 How will Washington insiders handle the pressure of our current economic crisis?  A new report indicates they have a tendency to turn toward the bottle more than any one else in the country.

According to a new study by the Substance Abuse and Mental Health Services Administration (SAMHSA), 8.1 percent of adults age 26 or older in Washington, D.C. are alcohol dependent and looking at a long-term sampling that abuse rate is on the rise.

The Washington Examiner first reported the story, noting that alcohol abuse has been a chronic issue in the District, affecting residents from the city’s streets to former First Lady Betty Ford in the White House. D.C. was also among the 10 states where residents most frequently reported smoking marijuana within the last month.  Cocaine use in the District was also high.  The survey says that while D.C. residents age 17 and under reported some of the lowest cocaine use in the country, District adults were among the top coke users in the United States, with 3.78 percent of residents saying they had used over a one year period.

We hope the current situation doesn’t send even more reaching for the bottle.