Save Me From My Food 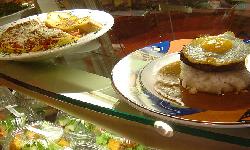 To say Americans are food conscious is a bit of an understatement. We obsess about it, and treat it both as medicine (healthy food) and a danger (toxic foods) to be wary of. As a nation, we continue to pile on the pounds. For some, food is even seen as an addictive substance, used for the emotional lift or as an escape from life’s problems. A visit to Overeaters Anonymous will give a sense of just how serious the problem is.

From a government standpoint, the question is whether over-consumption should be a matter for public policy and regulation. After all, education by way of the food pyramid and public service announcements hasn’t prevented the plague of obesity. One in three Americans is obese, according to the Centers for Disease Control. So what to do?

In Hungary, where a whopping two-thirds of citizens are overweight, they’ve instituted a “fat tax” which adds a surcharge on fatty, oversalted and what we in the US refer to as “junk” foods. This serves both as an incentive to reduce consumption and a way to raise much needed revenue.

In the US, New York City has been the focus of attention as Mayor Bloomberg has tried to regulate everything from soft drink sizes to the empty calories from alcoholic beverages (the latter failed, the former is in place). Are soft drinks really a matter for concern? Well, there is at least one instance where a Coca-Cola addict died as a result of continuous over-consumption. Granted, this happened in New Zealand, but they drink the same products there that we do.

One the one side, we have medical experts telling us about the long term harms of junk food consumption and a willingness by some government bodies to take action. On the other, we have a push-back from outraged citizens who claim the right to eat whatever they want. In the middle are those who suffer food addictions and need treatment.