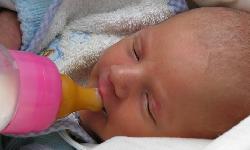 A couple stories in the news bring up something parents should be aware of. The first is out of Texas, where one-year-old Demarion Crow was brought to the hospital with a blood alcohol greater than 0.2 according to reports.

That level of alcohol can be fatal in a child. They don’t process alcohol as efficiently as adults, and they don’t have the reserves needed to prevent serious consequences. Fatalities come, not from the alcohol directly, but a sudden and lasting fall of blood sugar as the liver can no longer properly provide it.

Demarion survived and is fine. The mother’s boyfriend was arrested for allegedly giving vodka mixed with juice to the child.

In a second case, out of Iowa City, a 22-month old was admitted to the ER, smelling of alcohol and tested at a 0.09 BAC. This is legally drunk in Iowa. The mother in that case was also arrested and wouldn’t say how the child got the alcohol. In both cases, giving alcohol to a child that young constitutes child endangerment.

A disturbing case outlined to train physicians describes the symptoms as lassitude, normal pupils and either the smell of alcohol or mouthwash on the breath. Coma follows from the blood sugar drop and brain swelling. In some cases this will lead to the death of the child.

Unfortunately, giving alcohol to a toddler can seem like a good idea to parents. They aren’t trying to get the child drunk, just to calm them and get them to sleep. The problems arise when too much is given and the fall in blood sugar leads to a coma-like state that mimics sleep. At this point, without treatment, the child may die.

The most common self-poisoning with alcohol in children comes with other forms of alcohol besides ethanol. Isopropyl and methyl alcohol are more toxic, and ethylene glycol (antifreeze) doesn’t have the bad taste that keeps kids from drinking the other forms. All of these can be fatal.

The cases cited above are the worse sort of poisoning. If the charges are true, caregivers intentionally gave booze to the children.