Alcopops In The News 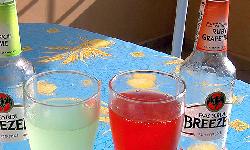 If the term is unfamiliar, you haven’t been keeping up with the controversy. An “alcopop” is an alcoholic beverage that is sweetened to alter its character and make it more appealing to younger drinkers. There are several types, including wine coolers and mixed drinks, but all have an alcohol content similar to beer.

The controversy this time is in Nebraska and concerns how alcopops should be taxed. Since they are made from wines or spirits combined with fruit juices or other ingredients, they have been classified in the same category as liquors. In Nebraska, this means they get a higher tax added into the price, as contrasted with beer, which is taxed less.

Sellers, both retail and wholesale, would prefer that alcopops get the beer rate, and they point to the alcohol content as the relevant measure. Since this is a state issue, the matter has gone through the courts and the State Supreme Court ruled the higher tax would apply – $3.75 a gallon instead of just 31 cents a gallon that beer has.

Both the beverage industry (which opposes the higher rate) and those concerned about alcohol consumption in the young know that price matters. It has been shown that consumption in younger drinkers falls dramatically as price goes up.

However, the battle isn’t over and there are powerful forces at work. Since the court fight is over, the new battleground is the State Legislature. Rewriting existing law would instantly change the tax rate and the court ruling would be moot.

Besides acting as a disincentive to young drinkers, the higher tax rate is also used to fund alcohol prevention and treatment programs in Nebraska. Should new law be written and passed, it is likely that the very programs addressing alcohol abuse will lose funding simultaneously with more underaged drinkers going for the alcopops because of a reduced price.