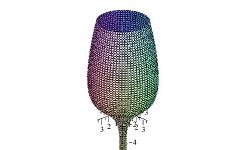 It may sound surprising at first, but the shape and style of beer glass influences the amount of beer consumed and how fast it goes down. Researchers at the University of Bristol published their findings online. They gave study participants beverages (both alcoholic and non-alcoholic) in two different basic glass styles. One was a straight-sided glass and the other, the more “friendly to the hand,” swoop-sided, or fluted, shape.

What they found was that the curved sided glasses (more typical for serving beer) had participants finishing their drinks (same volume) in about half the time. But even more surprisiningly, this speed-up only happened with alcoholic beverages, not the non-alcoholic drinks. It didn’t matter which type of glass the non-alcoholic drinks were served in, consumption was the same.

This research parallels other work done with portion size and eating behaviors. Larger plates and more generous portions lead to eating more, while smaller plates and portions do the opposite, both without affecting a person’s sense of being satisfied. It would be interesting if getting drunk follows the same perceptual bias.

A second test asked participants to estimate whether a glass was more or less than half full. The results were very accurate with straight-sided glasses, but less so for the curved glasses. This led researchers to speculate the higher consumption comes from a mistake in estimating how much has been consumed between the two shapes. However, this hypothesis doesn’t explain the lack of a difference in non-alcoholic beverage consumption.

The popularity of fluted beer glasses might reflect a kind of “industry wisdom” in the bar and pub businesses. The more a patron drinks, the more they spend on alcohol. On the other hand, regulations about what kind of glass can be used would likely have the opposite effect – a possible target for legislation.

Hopefully, the researchers will continue their questions and find out how drinking from a bottle, single serving or a pitcher of beer changes drinking behavior.