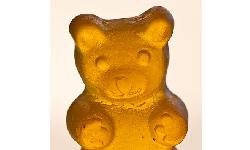 Alcoholics are very familiar with the concealment problem. Smuggling booze into work or hiding it for easy access is part of the lifestyle. Teens who want to drink face a similar problem and they’ve found a new way to hide the booze from parents and teachers.

They are called, “boozy bears” or “rummy gummys” – vodka absorbed into gummi bears or other gelatin based candies.

The idea is similar to Jello shots. In a Jello shot, vodka or other high-proof alcohol replaces some of the water used to make Jello. You are left with a plastic like, flavored mass indistinguishable by eye from regular Jello. The same thing can be done with gummi-type candy. Teens take a package and soak the product in alcohol (vodka being the preferred choice) and overnight the booze is absorbed into the bears (or worms or even caramels).

One video on the process shows how eating a handful of the gummies actually puts the equivalent of a few drinks into someone. They show before and after breathalyzer tests. The video also shows how the boozy bears are made.

So now we have another one to add to the long list of ways kids (and sometimes adults) hide their drinking. It joins such things as putting vodka in water bottles (vodka is clear, so it doesn’t show), or injecting alcohol into boxed drinks. The only difference may be that naïve drinkers will try the candy version – not being a liquid, it just doesn’t seem like drinking and the candy flavoring has a certain appeal to kids.

News reports that teach how to make the product they are warning against often receive criticism. The objection is that it only spreads the idea to other kids. But let’s not fool ourselves. By the time these things make the news, the kids have already seen them on the net or heard about them from other kids. The only people getting new info here are the unaware parents and teachers.