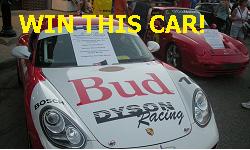 In California, current law sets alcohol sales into a three tier format. Manufacturers, wholesalers and retailers are all separate licensed entities. They are currently prohibited from interacting to allow promotions. That means that a manufacturer cannot offer a rebate to retailers and contests on beer products directed at consumers are prohibited. That would change if Senate Bill 778 passes.

The bill alters the law and specifically allows contests as well as exempting any winnings from other state programs which take a percentage from other contests – such as the percentage that goes to schools from bingo or lottery type events. This new law is touted as a boon to consumers by the alcohol producers and a real black mark by those concerned that the contests would encourage drinking.

Alcohol Justice, an industry watchdog, is running an online campaign to stop the passage of the bill, with a printable letter users can sign and mail to their representatives. The claim is that the new rules would encourage over-consumption and add to existing harm alcohol causes.

One provision of the bill, not requiring a purchase to enter any contest, is seen as mitigating the “buy to play” aspect. Those against the measure point out that any such no-purchase-entry still represents an unfair advertisement for an alcoholic product. Further, they see the breakdown of the three tier system for alcohol production and sales as an erosion of control on the market. Alcohol Justice sees the new law as the direct result of alcohol industry lobbying efforts.

The legislation is currently in committee. The current text of the bill can be found here.

Alcohol sales and whether or not contests are allowed vary by state. Regulations fall largely under state control and many states already allow this “feature.” No study was provided that actually shows the impact of contests, but the conventional wisdom is that if they didn’t generate sales, manufacturers wouldn’t be interested in them.