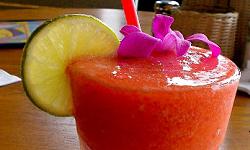 Not much sounds more refreshing on a hot day than a large cup filled with a frozen fruity concoction. But adding alcohol and selling them to drivers – still in their cars – seems a bit much. But it’s legal to do so in Texas and Louisiana. There is even a small business guide telling you how to set up shop.

Called drive-throughs, alcohol sales to drivers through the windows of their vehicles sounds like a winning business idea. No more having to park, or get out of your car, or walk. And selling sealed containers of beer or other beverages doesn’t cause much controversy – people transport alcohol everyday in their cars.

The problem arises when drivers buy a frozen alcoholic beverage in the same cup you’d buy a fast food soft drink in. There’s even a punch-out hole for a straw. The “seal” in this case is a plastic snap-on lid. The question is then: Does anyone expect a motorist to take the drink home before grabbing a swallow or two?

Legally, such beverages are OK. Practically, it’s a recipe for a violation of the drinking and driving statutes. What’s worse, by never getting out of their vehicles, it’s harder for store personnel to tell if someone has been drinking already.

A USA Today story on the subject says that New Mexico outlawed it after they discovered that DUI arrestees preferred drive-throughs over package stores. They also quote a franchise owner in Texas who defends the practice:

Brian Dobbins, vice-president of Eskimo Hut, a Texas-based drive-through daiquiri business with 23 company-owned and franchise stores from Amarillo to Houston, counters that those drunken drivers aren’t his customers.

“We are a family atmosphere store that is trying to give a product to people that don’t want to go to the bar,” said Dobbins, whose company also offers non-alcoholic versions of its drinks.