Give That Baby A Drink!? 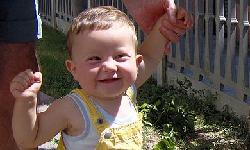 It’s probably not surprising that parents believe whacky things. What may be surprising is just how many do so. For example, some mothers think that giving alcohol to their toddler or young child will protect them from drinking later on.

The idea parallels one where you make a child smoke until it makes them sick, thinking that doing so will keep them from taking up the habit. But, just as with smoking, aversion to alcohol because of an early, negative experience doesn’t work. In fact, one of the predictors of alcohol use and abuse during teen years is early exposure to it.

So how widespread is this false belief that giving a child a sip of booze will turn them away from it later? A study in the Archives of Pediatrics and Adolescent Medicine (abstract here) found it surprisingly common. About one in four mothers think it’s a good idea to give a sip of alcohol (called, “prosipping” by researchers).

The mothers believe prosipping helps protect their children later on when they are exposed to alcohol by peers. The common sense idea is captured in the euphemism, “Once bitten, twice shy.” After all, alcohol tastes bad – why wouldn’t a kid remember the bad experience later on?

Even those mothers who haven’t done it still think the idea makes sense, with 40% thinking that denying alcohol to a curious youngster would only make them want it more.

With the results of this study in mind, pediatricians have an opportunity to correct the misconception. Mothers, especially first-time moms, should be told to avoid giving any alcoholic beverage to their child, something even more likely to happen if drinking is part of the household routine.

When drinking is part of home life, it’s much harder to keep adolescents from experimenting or convince them that alcohol shouldn’t be consumed. The message they get is that drinking is “something adults do” and it may be seen as a rite of passage or one of the freedoms that comes with adulthood. It can take a strong hand and some serious effort to get past these ideas in teens. However, trying to intervene in this process by giving booze to a young child defeats the purpose.