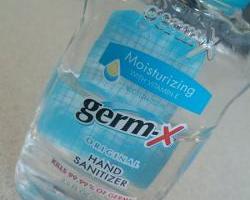 In what will hopefully turn out to be a non-trendy trend, news reports of teens extracting alcohol from hand sanitizers have jumped. MSNBC has reported it and other online news sources have picked up on the story.

In a nutshell, hand sanitizers like Purell have a single active ingredient – ethanol. At 62% alcohol, the rest of the product consists of scents and gelling agents. This is why they leave the hands dry after use – the alcohol evaporates. By adding salt to the gel, the alcohol precipitates out and can be extracted. What results is a (mostly) alcohol solution at about 120 proof – enough to get a teenager a buzz.

The attraction, besides the cool science (salt extraction and filtering) is the legal nature of hand sanitizers. No one checks ID for purchase. The downside, which teens might not realize, is that all alcohols are not created equally. The alcohol used in hand sanitizers is denatured – it has additives meant to make someone sick if they drink enough of it. And in some sanitizers, not all the alcohol is of the drinking variety. Some include a mix of ethanol and isopropyl alcohol – one test using the method found 10% isopropyl (rubbing alcohol) in the extract.

Finally, the reason this all came to light was a spate of poisonings from alcohol in California. Apparently, five teens hit on this method and drank the result, ending up with a visit to the emergency room. Five isn’t a trend, but unfortunately, with the spotlight of the news on this practice, it might become a self fulfilling prophecy as teens hear about it and push it toward viral status. There is already information on the net about how to do this – which wouldn’t be bad if they included the warnings and risks associated with drinking denatured alcohol and isopropyl alcohol.

For now, all we can do is wait to see if the underaged drinkers among us switch from mouthwash and other household products to this new way to get a buzz.