How Would You Vote? 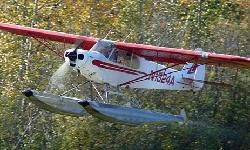 Imagine you are on a jury tasked with deciding fault in a wrongful death lawsuit. There has been a plane crash, and the grieving common-law widow is suing the airline company and the estate of the pilot for compensation. Her husband, along with three others, has been killed. The small plane only carries four, including the pilot, and it went down on the way back from an outing. The twist? The husband caused the accident the wife is suing about.

According to a story from CNN, three members of a remote native village, where alcohol is forbidden, were returning from a trip and had been drinking heavily. The passenger sitting behind the pilot (the husband in the wrongful death suit) jammed his feet into the pilot’s seat, pinning him against the instrument panel and causing the crash. They know this because the man’s ankles were broken, the pilot’s seat was jammed forward, and the pilot’s wrists were broken, apparently in an attempt to push back.

The three passengers were drunk and had already been refused a boat ride back to their village because they were trying to smuggle alcohol in their baggage. Several beer cans were also found in the plane after it was recovered from the water where it went down.

On what grounds can the widow of someone who caused the crash sue? It is against FAA regulations to transport passengers in a plane who are drunk. Likely for the very reason the plane crashed – drunks do stupid things. So the question then becomes whether someone can sue when the actions of the deceased caused the very death that is the subject of the lawsuit.

There is precedent. Bar owners have been found negligent when they allow a customer to become drunk and that customer subsequently drives off and crashes their car. But the pilot here didn’t provide the alcohol. And there is no requirement to test your passengers to see just how drunk they are.

How do you vote?