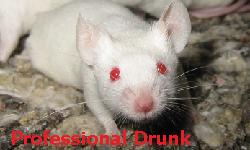 It’s a cliché that plays out nightly in bars across the land. A drunk is identified because they lose the ability to remain stable. Cops use it in field sobriety tests. Comedians make fun of the slurred speech and inability to perform even the simplest tasks. And it is funny in that context; not so much when the same imbalance causes an auto accident.

Although it’s well known that the mental effects of alcohol abuse happen in the brain, only recently have scientists found that the pathway to stumbling drunkenness involves the immune system’s response to drinking. Now, researchers at Australia’s University of Adelaide have pinned down one element in the chain that leads to the classic symptom of having one too many. They studied mice given alcohol and blocked an immune receptor in the brain with drugs. This was compared to normal mice and mice that had been genetically altered not to have the receptor.

The study showed that without the immune response, alcohol didn’t cause the physical impairment and lack of coordination. The basis for the research is how alcohol causes an inflammatory response, mediated by the immune system, in the brain. Until now, it was assumed that the direct effects of alcohol’s toxicity interfered with nerve transmission. It looks like there’s an inbetween step where the immune system reacts to the alcohol present, resulting in the inability to control one’s movements.

It may now be possible to block this effect, although who might benefit isn’t addressed. Perhaps the mythical pill featured in spy novels – where the hero is able to drink their opponent under the table to gain information – will become a reality. Since the study didn’t deal with cognitive impairment, we shall have to wait and see what emerges.