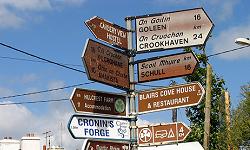 In an odd bit of news out of the Emerald Isle, Kerry County Council members voted to allow a higher blood level for rural drivers in their jurisdiction. The measure was introduced by a local pub owner who felt that the current 0.05 BAC was too restrictive and his rural patrons ran the risk of getting busted on their way home.

The logic is that current standards unfairly prevent rural customers (those who have to drive along rural roads some distance after a night out) from enjoying an evening of drinking. The proposed permits would allow these patrons to drive with a blood alcohol level of 0.08 after getting approval from a judge.

Also considered was the nature of the roads. In rural Ireland, the roads are often poorly maintained, sometimes dirt and always winding. The thinking here is that rather than being more difficult to navigate, the very nature of the roads prevents high speed and injury – meaning drunk drivers won’t cause that much harm, even if they do have an accident.

Reaction to the vote has been mixed, with critics pointing out that the nature of rural roads actually makes an accident more likely. Others mention the vote itself as not having merit – the measure passed 5 to 3, with 12 Council Members absent. Hardly a plurality.

Ireland only recently went to the stricter standard and the new laws are credited with dropping the number of fatalities related to drinking and driving substantially. It’s up for grabs whether a measure passed by the County has any force, since the law that sets the drinking limits is national. Illegal activity usually can’t be set aside simply because a permit was issued.

According to news reports, the Irish Department of Transport, Alcohol Action Ireland and the Road Safety Authority have all voiced opposition to the proposal, citing the overwhelming evidence linking alcohol consumption with impaired driving.