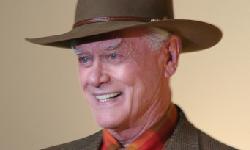 Noted actor, Larry Hagman made it to 81, the last seventeen years of which can be counted as bonus time. Why? In 1995 he almost died from cirrhosis of the liver. Doctors only discovered how bad things were when they performed a liver transplant because of a tumor. The operation revealed his live was failing because of his alcoholism. The transplant was successful, although doctors now reveal he nearly died from the surgery.

The legacy of alcohol stuck with Hagman though. While no longer drinking as much as before his surgery (reported to be five bottles of Champagne a day), he still had a genetic trait that made him prone to cancer, and the alcohol had made him even more vulnerable.

The latest diagnosis was cancer of the throat. According to reports about his condition, his drinking contributed to his eventual death. “Larry Hagman probably inherited a genetic tendency to cancer, but he was also such a severe alcoholic that he developed end-stage cirrhotic liver disease, which initiated a chain of events that hiked his cancer risk,” his doctor said.

While smoking was not blamed directly for his throat cancer, Hagman lived the high life, with drinking and smoking a part of the background – not uncommon in his generation.

Eight decades may seem like a ripe old age, but Hagman had recently undertaken to reprise his role on a remake of “Dallas,” and despite his diagnosis, seemed otherwise very energetic and ready to work. With ever increasing lifespans on offer, there is no telling how long he would have remained productive if he hadn’t been an alcoholic.

With a family history of cancer, it is likely his doctors informed him of the increased genetic risk. Unfortunately, by the time he cut out the drinking, the damage had already been done.