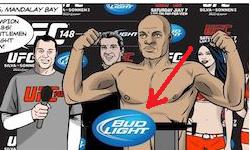 There’s an ongoing battle for territory on Facebook and other social media outlets among advertisers. In a previous article we saw how self regulation is supposed to solve the problem. Certainly the alcoholic beverage industry doesn’t want the FDA or other regulatory agency stepping in and telling them what they can and cannot do.

But now, there’s an example of what advertisers will do to push the line in their favor.

A recent Facebook posting with marketing material by Anheuser-Bush may be a flagrant attempt to draw “younger eyes” to their products. A comic was posted about mixed martial arts (MMA) with the “Bud” name inserted (the Bud Light logo appears in the picture). This isn’t a black-outlined comic in the style of the Atlantic or New Yorker. It’s a comic book style, full color, scene driven strip.

The trick? The ad didn’t appear on the Anheuser-Bush site. It showed up on the UFC site as part of a promo for an upcoming event. The ad has since been removed and nothing similar now appears. However, the Internet doesn’t just “go away.” All it takes is a screen capture and material is preserved forever.

Critics of the practice point out how beer ads in comic format, especially on a site with many under 21 visitors (MMA is popular with teens) is a flagrant attempt to circumvent the exact standards the beverage industry has set up for themselves.

How much does a single logo on a single site really matter? Not much. But one has to wonder why would they do it at all if it didn’t help brand recognition? No one is saying that comics are going to drive kids to steal a beer from the refrigerator. The arguments are about how this new should media be handled and whether self-regulation really works in practice.

We’ll have to stay tuned to see which side wins the argument.