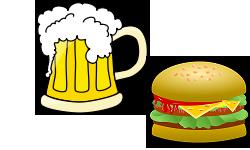 It’s predicted to be a boon for movie theatres in New York State. The law allows consumption of alcoholic beverages in business locations where food is served. This means you could conceivably take your beer or wine with you to watch the movie.

For struggling movie houses, offering alcohol as part of the movie experience may be the draw they’ve been looking for. After all, traditional cinemas are facing a tough time of it with competition from the internet and premium movie channels on television. There’s also the possibility of turning a dull movie and a ruined date into an alcohol-fueled occasion.

While AMC is contemplating instituting the “beer and a movie” package, they haven’t addressed the expected downside. What happens when an obnoxiously loud drunk starts yelling at the screen? The movie house risks turning patrons off of movie going altogether – the first time someone vomits loudly during a film.

An AMC spokesperson is quoted in the NY Post article: ““We’re excited about the possibility of bringing AMC Dine-In Theatres to our guests in New York,” said spokesman Ryan Noonan..”

NY State has very liberal alcohol laws compared to the rest of the country, but some municipalities have local restrictions that are tougher. AMC will find the easiest entre into the booze business in NY City itself, where the famous nightlife means alcohol can be served until 4 am. The idea of a little libation along with entertainment fits naturally in that town. It is unknown how other parts of the State will react or whether local ordinances will be enacted to prevent “drinking and watching.”

Interestingly, the bill’s sponsor, Assemblyperson Cathy Peake, mentioned that adults don’t enjoy movies designed to cater to adolescents. The implication is that some alcohol will allow adults a pleasant time while watching children’s movies. Perhaps she’s right. After all, alcohol does impair our mental faculties – perhaps enough where a Disney cartoon will seem like a moving experience.