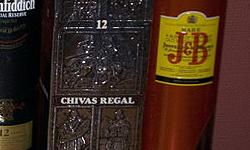 It’s an interesting marriage of law enforcement and technology: New Jersey law enforcement used commercial alcohol testers to bust 29 establishments who were diluting or altering their drinks. In some cases, the restaurants and bars were substituting rubbing alcohol or even dirty water for name-brand beverages.

The “True Spirit Authenticator” is a device which uses transmitted spectrums to check samples for alcohol content. Undercover investigators visited licensees, purchased drinks and used the tester to check alcohol content. Where there was a suspicious variant, they would then send the sample to the manufacturer for analysis. By ordering straight brand name booze, with no ice or mixes, they were able to figure out who was tampering. According to a New Jersey.com report one of the big names involved was TGI Fridays.

With 63 establishments checked and 29 busts, it appears about half of New Jersey liquor licencees are cheating their patrons. In some cases, they might even be poisoning them. Rubbing alcohol does contain ethanol, but mixed in are denaturants, sometimes even methanol. Methanol is the toxic contaminant that gives bootleg moonshine the reputation of causing blindness. Other things added included caramel food coloring and dirty water.

Some places were merely substituting cheaper, off brand booze for more expensive types. This too is an illegal practice.

“What these 29 establishments have allegedly done threatens the integrity of the alcoholic beverage industry as a whole,” state Attorney General Jeffrey Chiesa said at a news conference today in Trenton. “This alleged scheme is a dishonest ruse to increase profits, and it is a slap in the face of the consumer. The consumer should have the peace of mind to know that when they pay for something, they get exactly what they paid for, no exceptions.”

New Jersey has more than 7,000 establishments who serve liquor to customers. “Operation Swill” only touched the tip of the iceberg. The State Attorney General said the investigations will continue.