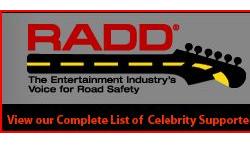 There’s a thing about catch phrases. They get in your head. One of the most famous, “Friends don’t let friends drive drunk” has been bouncing around for years. That slogan along with “Buckle up, every trip, every time” have penetrated the public consciousness, but the organization behind them hasn’t.

It’s actually been around since 1986 as a non-profit dedicated to using the power of celebrities to help get out messages to prevent drunk driving and alcohol abuse. Most commonly known as RADD for Recording Artists, Actors and Athletes Against Drunk Driving, the current name is the Entertainment Industry’s Voice for Road Safety.

You can almost bank on it. Whenever you see a celebrity in a powerful PSA about safety belt use or drunk driving, RADD is behind it or helped make it happen. They target a younger demographic, and they use “star power” to do so.

There’s even a theme song, a Beatles tune, “Drive My Car” that was donated for use by the organization.

Last year, at their annual Spirit Awards in Los Angeles, Toyota revealed the custom “RADD Scion” – a vehicle meant to spread the awareness message while providing transportation for members of the organization. The ceremonies also commemorated the end of a two-year cycle of grants given to promote safety messages at college campuses.

The reason RADD style messaging is worthwhile is it harnesses the popularity of certain artists among the target demographic. Young people are often hard to reach but they represent the segment with the highest risk. Pairing the celebrity of artists who already get the eyes and ears of young people is the best way to have an impact.

Other slogans you may know from this creative bunch:
“Your lifestyle is your business. Don’t take it on the road”™
“Music Lives and You Should Too™”
” Designate Before You Celebrate™”
“Fans Don’t Let Fans Drive Drunk™”