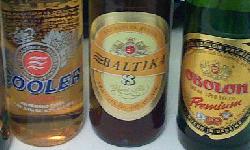 In a country known for its vodka production and consumption, most don’t know it’s the fourth largest beer consuming country in the world. But now, Russian authorities have instituted several measures to curb beer drinking.

The first took effect January of this year: low alcohol beer will no longer be treated as a food item. That in itself sounds strange to Americans. Beer as food? In Germany, it’s called Kinderbier, a low alcohol brewed beverage that anyone, even kids can drink. In Russia, beer with less than 5% alcohol content has been regulated the same way as food. In other words, almost no regulations at all. Anyone could buy it and drink it wherever they liked. The new rules also prohibit the sale of beer (low alcohol and regular) in many public places, like airports and bus depots.

Starting in July, regulations will go into effect to curb many forms of alcohol advertising, including banning television ads.

The new attitude is expected to strike directly at Russia’s alcohol problem. According to Advertising Age, alcohol abuse is a longtime problem in Russia, where more than half of all deaths of people aged 15 to 54 are caused by alcohol. The shocking thing about that figure is the spread (40 years) and the impact on those who are so young.

Russia’s current president, Dmitry Medvedev, has made the national alcohol abuse problem a priority and his administration has been strongly linked to the anti-alcohol movement. The goal is to drop per-capita alcohol consumption from the current level of 18 liters per person per year down to 8 liters over the next seven years.

InBev, the parent company of Budweiser, only recently launched in Russia (2010). According to Advertising Age, they’ve invested heavily in selling there and this latest round of regulations may have the company rethinking their strategy.