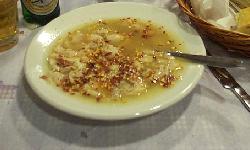 A recent meeting of the American Chemical Society was treated to some interesting info on a folk remedy for hangovers. Known locally (New Orleans) as “Old Sober,” the dish is a Korean import: Yak-a-mein soup. According to Alyson Mitchell, PhD, the dish deserves its reputation because it contains just the ingredients needed to combat “morning after” headaches from overconsumption.

Old Sober has a salty beef flavored broth (water and electrolyte replacement), noodles (carbs), beef (protein source) and egg (containing the amino acid cysteine). The dish may also have onions or other ingredients, with a chicken and a shrimp version.

“Hangovers have been called a ‘metabolic storm,’” said Mitchell. “They result from high blood levels of ethanol and the accompanying dehydration, direct toxic effects of the body’s breakdown of alcohol into acetaldehyde and toxic effects of substances called congeners that are present in darkly colored liquor like scotch and bourbon.”

The ingredients make sense and specifically, the cysteine in the egg yolk helps get rid of excess acetaldehyde, a breakdown product of alcohol metabolism.

While it’s nice to know that chemists are on the case in even so mundane a subject as hangover treatments, even Dr. Mitchell says the best way to avoid the pain of a hangover is to drink moderately or not at all. It’s also helpful to work on replacing lost nutrients the night of, instead of the morning after. The diuresis from alcohol causes dehydration, and replacing fluids lost with an electrolyte mix (so-called sports drinks) doesn’t have to wait until the next day. Vitamin B-1 supplementation is also a good idea.

Coffee, on the other hand, another staple of the hung-over, can contribute to dehydration because of the caffeine. Fatty foods, eaten while imbibing, will slow down absorption of alcohol, giving the liver a better chance of dealing with it.